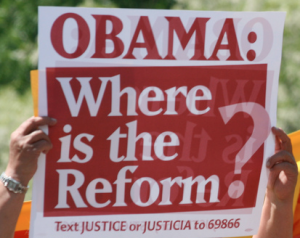 The President made it clear that while his Administration continues to improve our legal immigration system, secure our borders, and enhance our immigration enforcement so that it is more effectively and sensibly focusing on criminals, the only way to fix what’s broken about our immigration system is through legislative action in Congress. The President noted that he will continue to work to forge bipartisan consensus and will intensify efforts to lead a civil debate on this issue in the coming weeks and months, but also noted that he cannot be successful if he is leading the debate alone. The President urged meeting participants to take a public and active role to lead a constructive and civil debate on the need to fix the broken immigration system.

Honestly, it sounds really good, but I’m waiting to see when the other shoe is going to drop. Remember how much President Obama was for the DREAM Act after it was already too late to pass it? I’ve written before that I hope, in the 2012 election cycle, President Obama and the Democrats do not take Latino voters for granted, and I can only reiterate that hope with regard to these hopeful words on immigration.

We already say immigration reform slip on the back burner during President Obama’s first term in office, I hope that we don’t see it happen again in this next election cycle. More importantly, it will be a lot harder for Obama to ignore us if we organize, register to vote and go out to vote. What do you think?