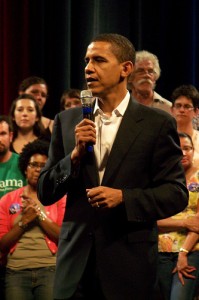 I’m not sure if the proper attitude is to say “It’s about time,” or “better late than never.” President Barack Obama has organized a meeting at the White House to discuss immigration reform.

It wouldn’t surprise me if your thinking is “we don’t need more talk.” And you’d be right to think that. President Obama made some lofty promises to the Latino community when he was a candidate looking to win the presidency. He said that immigration reform would be a first-year priority. And here we are well into the third year of his presidency and he’s finally gotten around to it.

According to Fox News Latino

In a statement issued late Monday, the White House said the president is holding the meeting to discuss the importance of fixing the nation’s immigration system to meet the country’s 21st century economic and national security needs.

Which is good. He’s invited an interesting mix of folks to his little talk.

I’ve been looking for an agenda, because I’d like to know exactly what they will be discussing and in what order, but I haven’t found one. The closest thing to an order of discussion came during a recent interview in Dallas

“The question is going to be, are we going to be able to find some Republicans who can partner with me and others to get this done once and for all instead of using it as a political football,” he said.

A question is a good way to keep a conversation in order. It’s also a good way to remind the Latino electorate that he hasn’t forgotten his promises. The trouble with this is that a President of the United states is a very busty person, so I’d be skeptical about a vision or promise that any sitting President may happen to make.

At the same time, though, he’s got to be careful with what he says: the Obama administration has deported more undocumented persons than his predecessor did.

Although Obama has repeatedly said he is committed to immigration overhaul, the deportation of a record 393,000 immigrants last year and other enforcement tactics during his administration have drawn criticism in the immigrant and Hispanic communities.

We’ll see how well he does playing to both side on this issue.