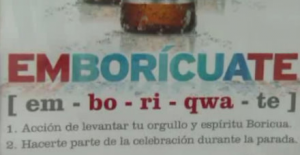 You may or may not have heard of this campaign yet, but for the annual Puerto Rican Day Parade, sponsor MillerCoors decided to run ads saying “Emborícuate.” Now, if you speak a little Spanish you know that to mean “become Puerto Rican,” but you would also know that it’s a play on “emborracharse” or “become drunk.” It’s not an overreaction to see that MillerCoors is equating being Puerto Rican with being drunk.

Some people are mad, notably Latin Rebels, who started an online petition to get the ads taken down before this year’s Puerto Rican Day Parade, on June 12 in New York. The ads are all over — at bus stops, in the subway, and elsewhere. WPIX.com had a little more on the controversy:

We then contacted Millers/Coors, an official sponsor of the National Puerto Rican Day Parade, for their side and a spokesman responded with the following:

“We would never produce advertising in any neighborhood or community that suggests, encourages, or endorses getting drunk, which is against industry advertising practices and our own marketing compliance code. We have a strong track record of responsible advertising and marketing.  We have always produced ads that encourage our consumers to enjoy our products responsibly. This specific ad is about celebrating the Puerto Rican culture and becoming part of the Puerto Rican Day celebrations.”

This is the third year of Miller/Coors rolling out the “Emboricuate” campaign.  The marketing strategy is part of the rollout to hype the annual Puerto Rican Day Parade.

This is not the first, nor the last time that companies will purposefully or “accidentally” make stereotypical or racist statements with their advertising. Remember Clorox’s insistence that cleaning was a “rite of passage” for Latinas (’cause we’re all maids)? Yeah. Sign the petition and watch WPIX.com’s report below.

[Video And Screenshot by WPIX.com]