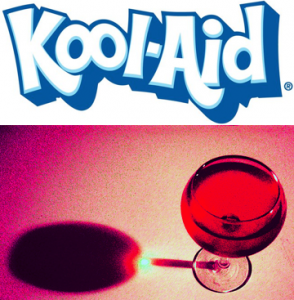 Latinos and their $1 trillion-plus buying power are making companies across the U.S. salviate, we’ve reported it before, and now Kraft’s Kool-Aid brand and winemakers are getting in the mix. For Kool-Aid’s part, Kraft has spent a pitiful amount of money marketing to Latinos, and when it comes to winemakers, Latinos have been buying the stuff lots in the past few years. So, it would seem, these companies barely realized the potential of this market, and now that they have, don’t want to be left out.

This year, Kraft says it will triple spending on Hispanic marketing over last year. Kraft declined to provide figures, but confirmed that the percentage of overall spending would be in the double digits.

Kool-Aid, in a first for any Kraft brand, has allocated the majority of its 2011 marketing budget to reach Hispanics. Television commercials that began running this week on networks including Univision and Telemundo feature families drinking the beverage at festive occasions.

As for the wine, Bloomberg Business reported that because Latinos have been buying wine more and more in recent years companies like Beringer Vinyards in Napa Valley, California are responding in kind:

Company officials say the effort has been successful, and they’re planning to expand it in California, then in Texas and New York.

It’ll be interesting as an observer to see how these companies market to Latinos, as sometimes these efforts can appear condescending or quasi-racist, let’s hope Kool-Aid and winemakers can do better.