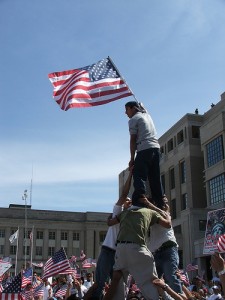 Movement on the anti-immigrant front has pretty much stalled. The fervor that  was ignited by Arizona’s controversial SB1070 has, in the words of the Associated Press, fizzled.

This doesn’t mean that we can put the whole ugly anti-immigrant mess behind us and move on, but it does look like the momentum has slowed and the final lines have been drawn.

What started in Arizona was a concerted effort to take the immigration issue to the state level. The excuse was that the federal government had shirked its duties to protect the borders and left the enforcement of immigration laws to the state legislatures. Arizona took the first shot and other states followed. The result would have been a patch work of disparate laws across the country that would have competed with established federal law.

But the Arizona law has since been stalled by legal challenges and the final stand is aimed at the US Supreme Court.  In the mean time all other state level immigration laws seem destined for a pile of moot points.

The AP did a comprehensive review of all of those state laws and found that “nearly every state in the union” had tried its hand at immigration legislation, but most all of them failed.

Many measures were set aside so lawmakers could focus on pressing budget crises, but immigrants have also developed more sophisticated lobbying efforts, and business owners came out strongly against tougher sanctions. Some worried about losing sources of labor and gaining extra paperwork. Others feared tourism boycotts like the one organized against Arizona.

Even in Texas, the much ballyhooed (they do a lot of ballyhooing in Texas) HB12 made it out of the House of Representatives but died in the Senate.

So far, only Georgia and Utah have passed comprehensive bills. South Carolina and Alabama are still considering them. Utah’s law includes a provision to allow illegal immigrants to work in the state, and the American Civil Liberties Union has already sued Utah over the law’s enforcement provisions.

Where does that leave us?

Two places, I think: the US Supreme Court and the US Congress – and one will merely set-up the other.  I’m pretty sure that the justices of the Supreme Court will find that the Arizona legislature over-stepped its boundaries with SB1070, and that decision will kill whatever anti-immigrant embers still glow in state legislatures like Georgia’s. The onus, then, will fall squarely where it has always been, at the federal level.

Does that mean that we’ll soon see an immigration reform bill in congress? Given the 2012 election calculus, not likely. But that’s fodder for another day.