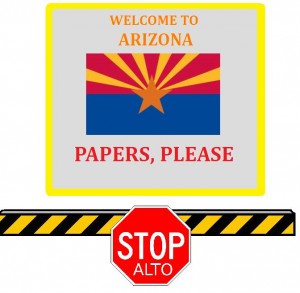 Saturday marked the one year anniversary since Arizona Gov. Jan Brewer signed the controversial anti-immigrant law SB 1070 into law and placed the immigration debate front and center in American households.

“One year after the signing of SB1070, I’m determined to fight for this legislation – all the way to the Supreme Court, if necessary,” Brewer said in statement Friday.

The law, which is currently mired in legal battle with the U.S. Justice Department over its constitutionality, has left in its wake countless copy-cat laws by other states looking to crack down on illegal immigration within their borders.

U.S. District Judge Susan Bolton blocked the most controversial parts of the law, including the provision that forces law enforcement officials to question a suspect’s immigration status, from being enacted just a day before the law went into effect last summer.  The state recently lost its appeal over the ruling.

Brewer claims Arizona was forced to pass the law as a result of the federal government’s failure to address the issue.

“Remember, it wasn’t until a month after SB 1070 was signed that President Obama agreed to send National Guard troops to the border,” the statement read. “Arizona’s actions and the subsequent national attention that resulted has helped pressure the White House to act on border security in ways it never would have otherwise.”

Critics of the law say it encourages racial profiling of Hispanics and has brewed anti-Hispanic feelings across the country.  In the months following the law’s passage, La Plaza reported on a surge of violence against Latino immigrants, including some attacks that resulted in fatalities.

There have also been economic repercussions on Arizona’s economy with several boycotts taking place.  Last year,La Plaza reported that Debbie Johnson, chief executive of the Arizona Hotel and Lodging Association, stated that the state lost an estimated 40 conventions which equaled revenue of around $15 million after SB 1070 was signed into law by Brewer.

A new set of proposed anti-immigrant laws was rejected the Arizona legislature this year, perhaps signaling a shift in attitude surrounding the hotly debated issue.

Reposted, with permission from Latinovations.