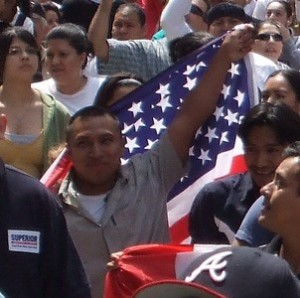 A lot of the chatter I’ve been catching over the inter-webs these past few days has been about Jeb Bush’s call for a more Latino-friendly GOP. Specifically, though, the talk isn’t about whether Bush is right or not, or if there’s a chance that the idea will take hold within the Republican rank and file; what’s got people’s attention is race, or the lack of it. This is how the Wall Street Journal reported on part of what Bush said last week in Miami:

He says Latinos assimilate more and faster then immigrant groups of the past. So much to ponder…

Here’s a quick list of the questions that come immediately to mind:

Are Latinos assimilating more simply because there are more of us to begin with? Could it be the geographic proximity to our homeland that gives Latinos a comfort cushion? Is it that, because Latino is a culture and not a race or ethnicity, we are naturally diverse and therefore prone to accept diversity?

There’s also the idea, that some people read into Bush’s comment, that with time Latinos will become more white; that as Latinos intermarry with other races, ethnicities and cultures the Latino community will become less defined, more white (there are boatloads-pardon the pun-of ideas and arguments in that statement). Some folks are thinking that as Latinos move organically towards a whiter identity the black/white divide in the US will become a black/non-black divide. That idea alone has the potential to open a chasm in our national dialogue.

Of course, the first question to ask is “how much heed do you pay to Internet chatter?”  This technology that you and I are engaged in at the moment amplifies the most inane of conversations (What’s the adage? If you ask if you’re insane, you’re probably not. What if you don’t ask if you’re inane on the Internet?)

But then, don’t we all have friends, co-workers, primos or tio’s who have married non-Latinos? What will we call their offspring?

And if that’s what the GOP is thinking…¡Dios mio!