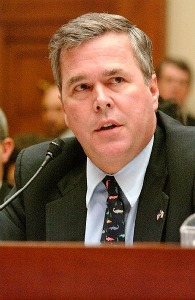 So now the republicans are getting serious about Latino voters, serious enough to organize a conference about it, in Miami.

They call their effort the Hispanic Action Network, and the conference was led by former Florida governor Jeb Bush. They focused on immigration, education and outreach but according to reports much of their time was taken up by calls to tone down the anti-immigrant rhetoric and move toward a comprehensive immigration reform.

This is how Bush framed the issue, according to the Washington Post:

“Typically what happens in politics is you’re working hard and you say, ‘Oh gosh, we better start working at campaigning in the Hispanic community,’ and it’s like Sept. 15,” he told the crowd at the elegant Biltmore Hotel in the Miami suburb of Coral Gables. “This is not about politics. This is about the conservative cause. If you look over the horizon over the next 10 or 20 years…without an active involvement of Hispanics, we will not be the governing philosophy.”

September 15? We could let that one go as a rookie mistake, but keep it in the back pocket for needed reference.

Some reports say that Latinos favor democrats over republicans by a 2 to 1 margin. Presidential election spreads have been wider: 3 to 1 by some counts. But that’s getting ourselves lost in the minutia, what matters is that a growing number of republicans have had a reckoning. They understand the political dynamic of Latinos in key swing states (Nevada, New Mexico, etc…) and they project that into the political reality of the coming decades.

Jeb Bush, who is fluent in Spanish and met his Mexican-born wife Columba when he taught English in her homeland, said reaching out “is about more than running ads in the Spanish-language media. It’s also about showing people you want them to be part of the effort, putting in the time even when people aren’t looking.” And, Bush added, “it means using rhetoric that doesn’t turn people off.”

It’s refreshing to hear anyone say that. And yet, I’m not willing to bet that their calls for inclusion and toned-down hate speech will take hold. It’s interesting how there weren’t clarion calls to stop or change prevalent attitudes, just to tone down the louder, more hateful and more obvious ones. They are, after all, politicos.

And Jeb’s not alone. Here are other notable republican efforts to woo Latinos;

Se estan amontonando. But it’s all good. Some observers think that concern over Latino voters was what prompted Rep. Steve King to be passed over for the chairmanship of the Judiciary sub-committee on immigration. In fact, I was almost willing to sit back and listen – at least. But then came this, a nice bone to chew on for my Tejano brethren.

But U.S. Sen. John Cornyn, R-Texas, addressed the issue of what do with those in the country illegally in only one line of his 1,600 word speech on U.S. border security.
“We must find a credible and compassionate solution to the 12 million illegal immigrants who are living in this country,” said the senator, who has repeatedly voted against comprehensive immigration bills that have reached the Senate floor.

So much for their credibility.

Here’s what would have been better. A conference about including Latinos in, say, El Paso or San Diego, where folks like Cornyn were called-out, not acquiesced. A conference that produced a working plan, much like the vaunted Plan for America or whatever it is they called that thing. Do something that big, that loud that calls for comprehensive immigration reform, then we’ll talk.

Oh, and while you’re at it, double check your Latino historical references. One day, give or take, matters.