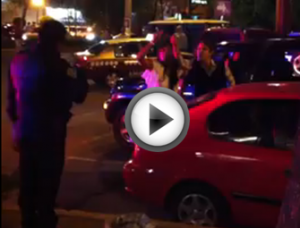 A little over two weeks ago, two very drunk, very belligerent women made national news here in Mexico. Out for a Saturday night on the town, these two individuals were stopped by Mexico City police. What resulted taught us a lot about the way this society treats police officers.

The two women are now infamously known as “Las Ladies de Polanco,” named after the tony part of town where they were stopped. The area is popular among Mexico City’s well-to-do and full of expensive apartments, restaurants, bars and nightlife. It’s also still one of of the safest areas of town, thanks in great part to intense police supervision in the area.

On the night of August 21, the women were stopped by police. The women, enraged at being pulled over proceed to belittle and then physically attack the police officers that surround the vehicle. In the end, the women got their way and left the scene of the incident without nary a traffic citation. Unfortunately for these women, a bystander was quick to start filming the scene. The video was posted on YouTube, where it spread like wildfire. A few nights later, the video made its way to the national news show hosted by Joaquin Lopez Doriga, Mexico’s version of Peter Jennings.

You have to see it to believe it. Here’s a link to the video, but be warned there’s some very vulgar language in Spanish:

After the broadcast, people demanded to know why the police did nothing. And then the hunt was on to find “Las Ladies de Polanco.” Of course, in this age of social media, the “ladies” had nowhere to hide. They were quickly identified as two D-list wannabe celebrities — a 2004 winner of the Miss Puebla state beauty pageant and a former reality show cast member. Their excuse? One of their purses was stolen and the police didn’t respond to the call shortly before being pulled over.

What is inexplicable is the reaction of the officers who stand there and after failing to calm the women, just stand there and take the abuse. Did the fact that they were being filmed affect their reaction? Did they decide it wasn’t worth the trouble since the women would find a way to beat the charges in the legal system? Were they concerned about being accused of abuse of power? Interestingly, Mexico City’s watchdog Commission of Human Rights publicly announced their support for the police officers and said that the women should have been arrested. When these guys side with the police department, you know the ladies did something very wrong.

As unfortunate as this incident is, it’s not that shocking. In a country where there is great social and economic disparity, there is a sense of entitlement among some members of society. Mexico is the land of “la mordida” — a term used to describe bribing officials when you want to get out of a scrape. Almost everyone I know in Mexico City has at one time or another paid a small bribe to get out of a traffic ticket.

One of the most striking details in the video is the way the women proceed to insult the officers about their wages — calling them “asalariados” or salaried workers. What’s implied is that those salaries are very low. The women obviously enjoy a higher economic standard of living than the officers, as evidenced by the late model Jeep they’re driving and the flashy clothing they’re wearing — which appears to make them feel entitled to berate the officers. This disparaging attitude is something the Mexican government is working hard to combat. In June of this year, President Felipe Calderón announced a new program providing scholarships for the children of federal police officers and members of the military. President Calderon also announced a new holiday, June 2, to honor police officers.

I think it’s a step in the right direction.

In the United States, we’re taught to respect, fear and obey police officers whether they’re NYPD or the night shift police officer in Bunker Hill Village, Texas ( it’s a long story, Mom). When those lights flash behind you, you pull over, get out your paperwork and pray. That’s what I believe is the most basic example of a just, safe and orderly society — a basic respect for the rule of law and those who enforce it.

And maybe it’s because I have that background that when I do run into a Mexican police officer or member of the military, I thank them for their service. Especially during this challenging chapter in Mexico’s history. My husband thinks it’s corny of me. I think saying, “Thank you and stay safe” is the least we can do. I recognize that are corrupt Mexican police officers but I believe that the majority are hardworking men and women. Just like I believe that most Mexicans, not including “Las Ladies de Polanco”  are good, decent people.

And by the way, the “ladies” will have their day in court after all.  The reality show contestant, Azalia Ojeda, was picked up by police at her home and taken to the authorities offer her testimony. And on Tuesday, the former Miss Puebla, Maria Vanessa Polo Cajica, turned herself in to the authorities, accompanied by a team of lawyers. She paid a fine of 1,745 pesos to stay out of jail. Both are scheduled to appear in court.

Alejandra Garza de Gutierrez is an American journalist and political activist living in Mexico City, Mexico, with her husband and daughter.