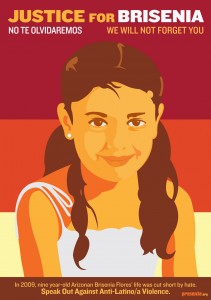 When was the last time you heard Nancy Grace rail obnoxiously from the television screen about the murder of Brisenia Flores?

You know who I’m talking about – it’s hard to miss her shrill delivery on the cable TV dial.  She’s one of those either-lover-her-or-hate-her people; I’m one of the click-the-channel-quickly-when-I-see-her-on-the-screen people. I’m not a fan.

Grace has gotten good traction from the Casey Anthony trial.

But she’s not the only one. The Anthony trial has been fodder for a noxious amount of media attention. Granted, the case had all the required ingredients of a Hollywood murder drama: the pretty baby, the attractive mother, the unspeakable crime. It was hard to avoid it in the tabloids and every news-type television program the country. It was the perfect story to bounce around the media echo-chamber, let it fester, grow and bring more viewers.

From a ratings standpoint, cynical as it may sound, it was a gold mine. Now that the trial is over, now that Casey Anthony was found not guilty, the story has gotten a second wind in the form of outrage, trial deconstruction, jury second-guessing and commentary. It should be good for at least another week. I wonder though, what if little Caylee Anthony had been a minority child? What if she had been, say, Latina? Would the attention have been the same?

No need to stretch the theory, we have a good case at hand – a recent case that has as much drama as the Caylee story.

Brisenia Flores, the nine year old girl who was murdered in Arizona, shot by a group of pseudo-vigilantes who forced their way into her home looking to steal drug money that was to be used to finance a citizen border protection organization. They killed her father, wounded her mother and then killed the nine year old for reasons that still make no sense. Basically, it was a group of anti-immigrants who killed a little Latina girl to pay for their anti-immigrant activities. Perfect fodder for Grace and her ilk, no? In fact, the third and last defendant in the Brisenia Flores murder trial, Albert Gaxiola, was being tried at the same time as Casey Anthony. But not a peep in the media.

This isn’t to diminish what happened to little Caylee Anthony. It is a horrible crime that has yet to be solved. But the story quickly went from being sad to being a side-show – amplified by the 24 hour news wheel and the instant Internet repost cycle. We talked about it, we tweeted about it, we linked to it on FaceBook.

How does that compare to the attention given to the Brisenia case?

It doesn’t. Comparatively, the Brisenia case is no less sad, no less outrageous. The only difference is that she was Latina. And please don’t misconstrue my intent.  This isn’t to take a victim stance, to say poor-are-we because our victim of heinous crime didn’t get the same attention as the little white girl. This is simply to point out a very real circumstance that has as much to do with the overblown coverage of the Casey trial as it does with the lack of attention to the Brisenia trial. The biggest difference now is that the Brisenia trial is not yet over. Two of the three defendants have been found guilty, the third trial is under way.  I’m wondering if Nancy Grace will have something to say about that.