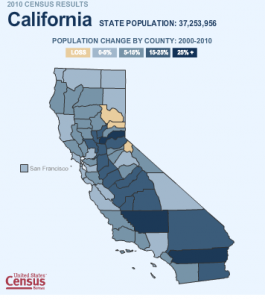 As we reported previously, California’s first batch of redistricting wasn’t particularly complimentary to Latinos and other minorities in California. Since, the redistricting commission has taken a second stab at it, and this time, it looks like things may be changing. First, what the case was before:

Newly drawn maps for congressional districts in California are being criticized for not adequately representing Latinos, with one prominent Latino leader calling them the “worse-case scenario for Latinos in California.”

Now, it seems, things are looking up — at least partially, according to Politico:

…a second draft of 10 Los Angeles County districts released last Friday that strengthens the prospects for several Hispanic House incumbents and most likely creates two new districts for local Hispanics. The initial proposal also raises the prospect that a Latino could replace Rep. Bob Filner, who is vacating his seat to run for mayor of San Diego. More revisions are expected for Hispanic districts across the state…

Frustrated by recent redistricting setbacks in other states, national Hispanic activists were dismayed when the California commission issued its first draft on June 10. If the commission’s results aren’t satisfactory, judges may reject the results of the plan and impose their own. Though Hispanics account for about 90 percent of California’s 3.3 million population gain in the past decade, the initial redraw does little to boost their political clout. On top of denying them the four new majority-Hispanic districts they hoped to gain, the new plan might cede control of one Hispanic-controlled district to Rep. Maxine Waters, even though Latinos dominate her proposed district. As many as three of the state’s six Hispanic House incumbents — including sisters Loretta and Linda Sanchez — face relatively new districts or ones with significantly smaller Hispanic populations.

What this is basically coming down to is the fact that, although Latinos are responsible for much of the population growth across the country, these populations are having to fight tooth and nail to receive proportional representation. Proportional, not even over-the-top. These fights are important, because they will affect us all for the next 10 years.

What do you think?