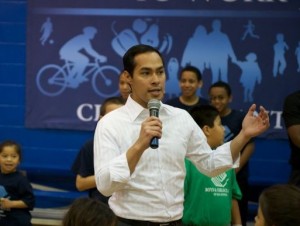 A Latino politician in Texas is taking the lead on green energy policy. Julián Castro, currently in his second term as mayor of San Antonio, a city that’s more than 63% Latino, he sealed some interesting green deals yesterday that will be essential to not only the future of South Texas, but will likely serve as an example for Latino politicians across the nation. We previously interviewed Castro here.

At an event this afternoon at UT-San Antonio, Mayor Julian Castro announced a suite of green energy projects that he said would position San Antonio as the nation’s “recognized leader in clean energy technology” and help fulfill his aggressive environmental goals.

Most notably, Castro and leaders from CPS Energy, the city-owned utility, pledged to shut down one of its coal-fired power plants 15 years ahead of schedule. By 2018, the city would mothball the 871-megawatt J.T. Deely Power Plant  – a bold move in a growing state that’s seemingly addicted to coal.

The accelerated closing of Deely was a decision driven in part by economics. Federal clean-air regulations would have forced CPS to install new sulfur dioxide scrubbers on Deely’s stacks at a cost of $555 million.

San Antonio plans to make up for the loss of power from Deely through a mix of energy efficiency and new renewable energy projects, including two solar power plants announced today: a 30-megawatt facility to be built by SunEdison and a 50-plus-MW plant, with the provider yet to be selected. Together with a 14-MW facility that opened recently in South San Antonio, the solar plants would push the city close to its goal of 100-MW of solar power by 2020.

The announcements, Castro said, would “truly define the nexus between sustainability and job creation.” San Antonio, he said, could become to clean energy what Boston is to biotech or the Bay Area is to high-tech.

“San Antonio’s decision to phase out the Deely coal plant signals the beginning of the end of the coal-burning era and its associated air pollution and illness in Texas,” said Eva Hernandez, with Sierra Club’s Beyond Coal campaign.