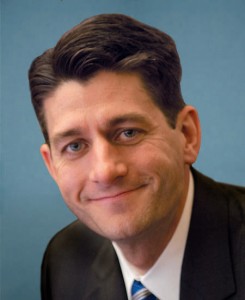 Yesterday, Wisconsin Congressman Paul Ryan held several town halls, one of which stirred up the topic of immigration and so-called “anchor babies.” What ensued, were  some rather insensitive comments from Ryan, in which he noted that “anchor babies cost money,” which is like saying U.S. citizen children cost money — how is it worse when they’re Latino kids?

At the town hall a woman in the audience challenged another ex-Marine constituent who brought up the issue, then asked Ryan when he spoke about “catch and release” immigration whether he was talking about human beings or fish.

Here’s what The Weekly Standard reported was the exchange:

“Are you talking about people or fish?” a woman in bold framed glasses blurted out.

“And that is racist and sexist,” she continued, turning toward the retired Marine. After some back and forth among crowd members, Ryan tried to calm them down.

“Don’t let him speak in a racist, sexist manner. You can stop him,” the woman said.

“The gentleman has a right to be heard,” Ryan replied.

Personally, that’s one of my favorite lines. When people with prejudice want to talk (hello birthers?) it’s called “free speech,” but when DREAMers or other people want to raise their voices, they’re arrested or escorted out by police. For example, the ex-Marine who brought up the issue in the first place referred to these “anchor babies” — who let’s not forget are actually U.S. citizens, presumably just like this guy — as “it.” Okay, so when Latinos (since he said they were coming from Mexico) are children, they are “it,” I wonder if this guy refers to his own children as objects or people?

But Ryan jumps on board, noting that “anchor babies cost money,” which is like saying that U.S. citizens cost money — it makes no sense. Are we supposed to gather that when the government spends money on Latinos (who happen to be U.S. citizens) it’s bad, but when they spend money on non-Latino kids it’s not a “problem”? That’s a question I’d like to have answered.