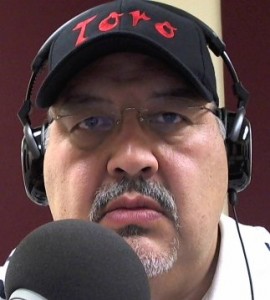 [Editor’s Note: This story was written jointly by myself and Pa’Lante Latino’s Christina Saenz]

Carlos Galindo, a 51-year-old Latino in Arizona, was at the state senate building Wednesday when he was escorted from the building by Capitol police officials, told he would be arrested or cited, and let go eventually with a citation. The next day he was informed by two DPS officers dressed in suits that he would be banned “forever” from the building, as per Senate President Russell Pearce. Such an order prevents Galindo from giving his civic dissension on any future anti-Latino bills in Arizona, despite the fact that Pearce does not have the power to ban anyone from anything “forever.”

The Galindo incident gives us an interesting glimpse into not only the future of Arizona, but that of this nation. Census numbers across the country are pointing to a tidal wave of Latino growth. In Arizona the resulting friction between the incoming majority and the current power establishment has resulted in legislation targeted exclusive at Latinos, something Galindo tells us was integral to his recent brush with Arizona’s Capitol police forces.

There’s a racist — and even white supremacist — tinge to Arizona’s legislative goals that are led by Pearce, Galindo says. It is a well-documented fact that Pearce is connected to a variety of anti-immigrant, hate groups. For example, Russell Pearce sponsored J.T. Ready — a known member of the Neo-Nazi National Socialist Movement and formerly of the Minutemen — into the Mormon Church, Galindo says. Ready is often found at the Senate building whenever the Pearce-headed legislature is in process. Galindo suggested that Ready’s mere presence can be intimidating to pro-immigrant demonstrators at the Capitol. 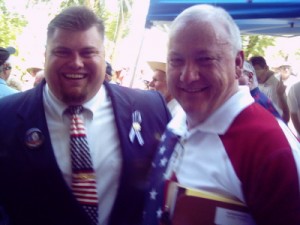 Galindo shared his recent experience with us to illustrate this point: The clash between the incoming majority and those currently in power has a distinct racial element. He fears the outcome could become (even more) violent. Thursday, another Latino activist, Sal Reza, was escorted from the Senate building and arrested, for trespassing, the same charges that Galindo was nearly given on Wednesday. Reza was attempting to apply for a permit for an event.

Galindo is a small business owner, commercial and private property owner, and a bilingual radio talk show host in Arizona, broadcasting in both Phoenix and Tucson. He said he was initially lied to by Capitol police authorities Wednesday that Democratic State Senator Krysten Sinema would not be holding a press conference regarding her anti-immigrant bill, SB 1225. When he found out the press conference was on and showed up, then voiced his discontent, he was escorted out by authorities and later told he might be arrested.

SB 1225 purports to be an “anti-drop house” measure that would step up penalties for those who engage in stashing smuggled immigrants in these houses, but Galindo maintains that it’s just another anti-Latino bill in “safe” clothing.

“You’re not just affecting immigrants, you’re affecting Latinos in general. People are getting hot under the collar. It’s going to escalate, it’s going to get crazy, I think you’re going to start seeing more movement,” he says. He even fears that many of his young activists will start to riot—which he strongly discourages.

The underlying issue is that, since Arizona is gaining a Congressional seat, Galindo says SB 1225 is Sinema’s ticket to running for Congress. She wants to use her Democratic standing to lure Latinos, simultaneously lure whites with her anti-immigrant bills with universal Republican support, and throw Latinos under the bus once elected. In writing the bill Sinema uses laws she’s previously criticized, goes after immigrants while saying she’s protecting children, and had her own minority supporters escorted out of her press conference after trying to hide it from them.

The biggest tragedy in all of this is that the politicians of Arizona are setting the State of Arizona up to fail. Arizona’s future hinges upon the success of its Latino population, and if politicos like Pearce and Sinema insist on either profiling Latinos, lying to them or preventing them from exercising their civil rights, Arizona itself will be the biggest casualty.