Most of my memories of Carlos Guerra come from reading articles he had written as a freelancer for various publications. One read and I was hooked. When I finally got to SWT, I found out he was writing for the SA Light (and later, the Express-News) and I enjoyed learning from this guy–not just the latest political chisme and news, but how to present myself in my political writings–I figured that’s what I’d end up doing anyway. It’s easy to say that his style, his wit, and his well-thought-out political leanings influenced me greatly. 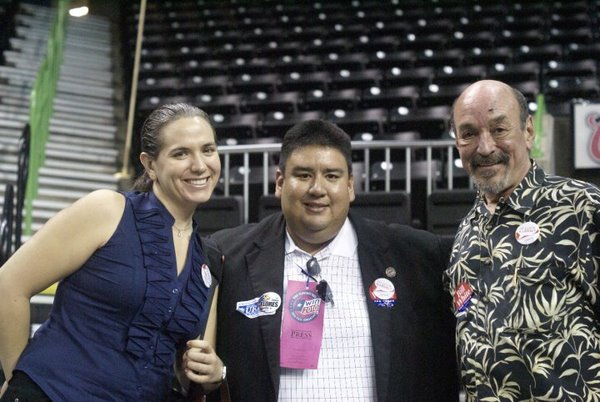 After exchanging e-mails with him during my college days regarding various columns (he answered every one of ‘em!), it wasn’t until 2003 when my friend and colleague in the cause Lorenzo Cano from the UH Center for Mexican American Studies gave me an opportunity to speak to some of his program students during a field trip to San Antonio, with Carlos serving as the main attraction. Let me tell you, it was a shock to find out at the hotel that I would be speaking AFTER Carlos. So, after the introductions and his usual funny jokes, I felt comfortable enough to tell him that he was going to be one hell of an act to follow. And he was, but I think through some osmosis of sorts I was able to use some of his wit in my presentation. It was THAT contagious.

We kept in touch by e-mail mostly after that, then came his retirement from the SA E-N which turned into phone calls about plans for the future. I was a constant link to his weekly columns from DC and he noticed and always thanked me (unlike some of those other mainstream hacks). So, it didn’t take long for him to become a fan of this “new media” stuff. We talked about how he wanted to start a blog, perhaps we could work together on some campaigns, work on some post-Census stuff, and then in the last year as the 2010 campaigns began to hop-up it was about how a couple of generations of Chicanos from South Texas could smack some sense into the Democratic Party. He could talk for what seemed like hours, and the ganas to impress him with my own wit and sarcasm made the calls longer as he listened to every word I said. Let me tell you, those were fun phone calls.

It was this past summer when we saw each other last–at the Texas Democratic Convention. It was my first convention in which I opted to stay out of the “convention process” and instead do some live-blogging and actually serve as one of two in his entourage as he held court in the main auditorium and we passed out those “Do I Look Illegal?” buttons that made the TDP leadership and at least one statewide candidate cringe. And then there was that awesome feeling when the press corps turned from scowling at this blogger to actually talking to me after I walked Carlos into the press room. Of course, some of my colleagues in the Texas Progressive Alliance will not forget how he joined us for dinner the afternoon of the Blogger Caucus, and later, the Blogger Caucus itself.

After his retirement from the SA E-N, he told me he had begun several different projects, including a couple of books. Most important to him was his legacy, and not just as a writer, but, generally, as a success story that could play a part in the success of future journalist, especially Latino journalists. And the Carlos Guerra Scholarship at Texas A&M Kingsville will provide exactly that–opportunities for South Texas kids to enter the next generation of journalism. I will definitely be a part of that effort because it is so important for the future of this state.

As my colleague in the cause, NewsTaco’s Sara Ines, tells us in her memories of Carlos, he was indeed a dreamer, never satisfied with just one level of accomplishment, especially for young people. That’s why he had recently made the DREAM Act his cause celebre because it was just too important to let thousands of kids who have only known the U.S. as home, and who we have invested in heavily through public education, fall by the wayside.

When someone moves on to the next life, those left behind are often left in “shoulda-woulda” mode. In this case, I can honestly say that every opportunity I had to speak to him, I’d tell him he was my hero. Of course, in Carlos’ own way, he’d say, “No, you’re MY hero, carnalito.”

And then we’d laugh, and tell each other our “see ya laters.”