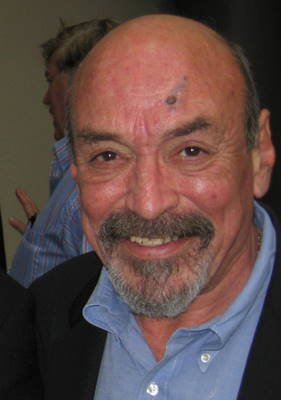 I was one of the last people to see Carlos Guerra alive.

The day after Thanksgiving I went to visit him in Port Aransas, we did some NewsTaco videos and he made me Thanksgiving Dinner #2. I still have some turkey and broccoli he made in my fridge. Tonight, it dawned on me that I was probably one of the last people to hug him, peck him on the cheek and tell him that I cared for him. I wish I could say it was more than an unfortunate distinction.

I last spoke to Carlos on Saturday night and we had plans to meet this week to do more NewsTaco videos and make plans for our future coverage. I was going to invite him over to my house and he was probably going to offer to feed me. Perhaps he would have told me more of his amazing stories — of the old days as an organizer, or as a jeweler, or a would-be conga player, or whatever else he had dreamed of — and I would have listened and laughed at his jokes. We would have had a great time.

Though it’s not the first time I’ve lost someone very close to me, I can’t say it’s necessarily easier this time around. I had the unfortunate experience of missing a call from the Nueces County Sheriff’s Office Monday and finding out about Carlos’ passing from friends on his Facebook Wall — despite how much this sucked for me, I think it’s a true testament to what an amazing person Carlos was. His power, imagination, dreams and influence reached far beyond the columns he wrote and into peoples’ hearts.

I first met Carlos when I was 19 at an event in San Antonio. He didn’t remember this, but when we were colleagues at the San Antonio Express-News, we really began to get to know each other as friends. Of all of the things I admired about Carlos, perhaps the most powerful for me was the fact that he was a dreamer. I always fell on the more practical side of life, but Carlos, he never put such realistic limitations on himself. He was one of the most alive people I have ever met and, I’m sure up until the time he died, he was dreaming.

There’s too much to say about Carlos that I feel like a few graphs here won’t do him justice, but as I write this all mocosa and distraught, I take heart in the fact that the man changed my life. He was one of the first and only men in my professional life to see past my youthful figure and into my mind, my heart and to genuinely ask me for friendship. He was a friend, a mentor, a confidant and a crazy jokester. In Port Aransas, this is one of the jokes I recorded for our NewsTaco audience:

It was fun to make those recordings, even if now it makes me sad. Carlos was an extremely generous and caring person to his friends — not that you’d know from his crazy evil eye professional mug shot — but he also cared so much about the world and the things he wrote about that when he talked to you it was hard not to be enraptured by what he said.

Lots of people will miss Carlos for different reasons, but I’ll miss him for my own. ¡Daba tanta lata! But now I’ll miss those inopportune phone calls. He was always ready with wit or funny jokes or an open heart. I honestly don’t know what I’m going to do without him, but I have a few ideas. I’m going to continue to promote his scholarship program, because it was something he was truly passionate about, that he really believed in. Another thing I’m going to do is start believing in myself the way he believed in me. But mostly, I think I’m going to honor him for the amazing person he was — not perfect, you understand — but a complete person who understood his humanity and tried like hell to make the world a better place.

Thanks for making me a better person, Carlos, I’m going to miss you. We at NewsTaco are anxious to hear others’ stories of Carlos, please share them here, on Facebook or email us at tips@newstaco.com.