There is more to the arrest of the SA DREAMers’ story than has yet met the eye.

Depending on the source, 15 or 16 students and activists were hauled off from inside and around the San Antonio, Texas office of Sen. Kay Bailey Hutchison on Monday evening after camping out there for up to nine hours. Yeah, details varied, but the bottom line is that more than a dozen folks were taken into custody for criminal trespass (in and around the public office of a U.S. Senator, no less).

But is that the whole story? 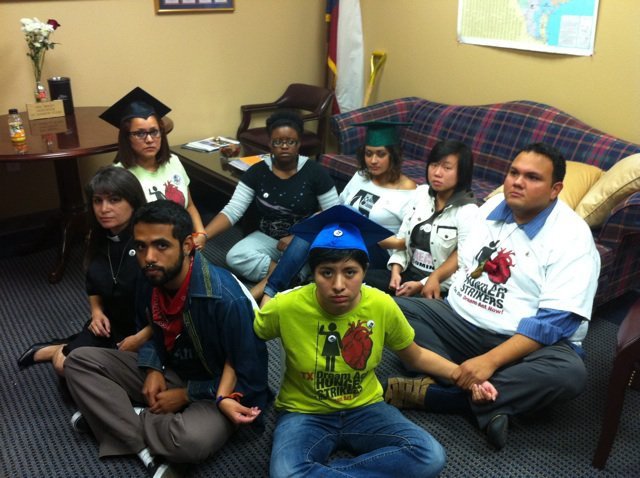 They were there seeking a dialogue with Hutchison, hoping to convince her to support the Development, Relief and Education for Alien Minors Act — aka DREAM Act — that would provide unauthorized immigrants, brought here involuntarily by their similarly situated parents, when they were minors and in their parents’ control, hoping to find a way to adjust their immigration status. A startling number of these students have done well in public schools in a nation where almost half of all native-born and otherwise authorized Latinos — and not much higher percentages of non-Latinos — don’t even finish high school.

It’s important to understand that only high school grads would qualify for DREAM benefits, at which point they would receive a temporary, two-year green card. If they finished two years of college or served two years in the military, they would be given resident alien status.

Be that as it may, the San Antonio Express-News report of the Monday bust included the following little tidbit, citing two very interesting assertions but cited sources for neither, that many have not noticed:

Hutchison, who was en route to Washington, D.C., didn’t want the students to be arrested, according to one of her staffers. But the property owner, Port San Antonio, did. (NewsTaco’s emphasis)

What exactly is “Port San Antonio?” It is the former Kelly Air Force Base, which the U.S. Air Force gave to the city after it left so it could be used “to the benefit of San Antonio, creating quality jobs and generating economic growth.” In other words, it is city property. Go to its website and you will see that the commissioners who govern it are appointed from City Council districts.

One, for the sake of ethical disclosure, is NewsTaco colleague Victor Landa, who says that no one from the Port of San Antonio contacted him about the asserted actions.

It would be bad enough for Sen. Hutchison to have sought the arrest of these kids, of whom one of my Facebook commentators wrote in support, “I didn’t risk my life defending our country so we would prioritize arresting hard working youth seeking a better life in the only country they truly know; let’s focus law enforcement on those that come to cause us harm…”

If it was city officials who called for their arrest, let’s just admit that free speech in San Antonio is being curbed by City Hall. And if that is the case, San Antonians should be at Thursday’s council meeting screaming for the return of their  First Amendment rights.