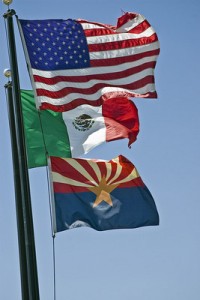 Okay, these are the facts. Arizona passed SB 1070. About 100,000 Latinos left the state. Lots of people, like celebrities and professional organizations, called for a boycott of the state. The result is that Arizona has lost about $605 million dollars.

According to the Center for American Progress, the state’s conference-associated losses are significant. With $217 million less spent by conference visitors and $388 million in economic output lost due to conference-related cancellations and booking declines, Arizona is out a whole lot of money. This for a state that’s been hit hard by that whole housing-bubble-bursting-resulting-in-economic-decline thing. Like that whole, “Day Without A Mexican” thing kind of came true.

Perhaps what makes matters worse for those still in Arizona, and what gives credence to the idea that SB 1070 was a bad idea in the first place, is that Latinos in Arizona wield about $31.3 billion in buying power. In a report, Datos Forecast 2010, it turns out that Arizona is the seventh-largest Latino market in the country and about 30%, about 2 million people, are Latino in that state. Which is to say, the state is driving away a huge chunk of its own economy.

The report shows that Latino student enrollment is up in schools, technology use among this group is growing, Latinos are younger (so will be needed to pay into the retirement system to support a 90% non-Latino retiree population) and Latinos are going to continue to grow.

If this weren’t such a tragic situation, you could almost laugh. The people who need Latinos in Arizona the most — wealthy white retirees — are the ones working so hard to drive them away! Even sadder is, it’s too late to alter these demographic changes, hopefully the courts will catch up with reality sooner rather than later and overturn SB 1070 in its entirety.