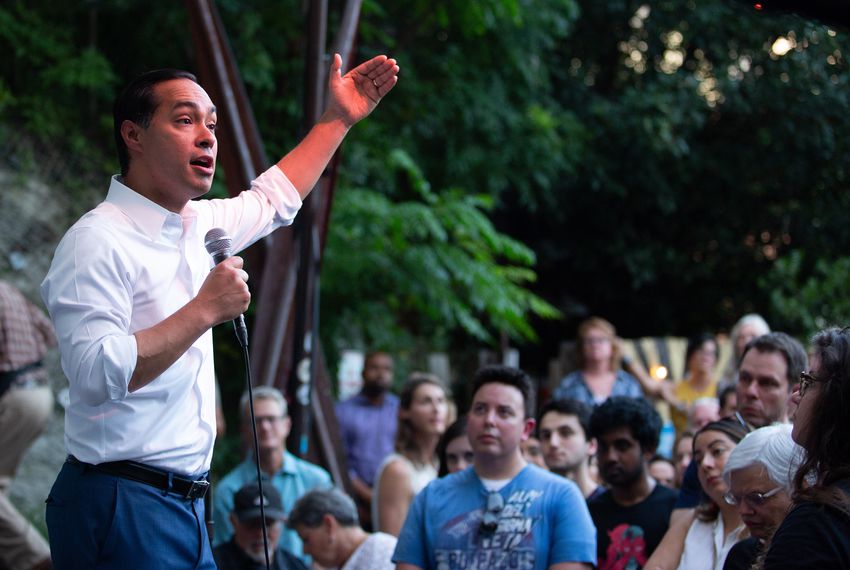 Callie Richmond for The Texas Tribune.

It's possible for a political candidate to win by losing — to rise in prominence as a result of a losing campaign for office. Beto O'Rourke tried and failed to do that. But keep an eye on Julián Castro, whose profile rose as his presidential bid fell apart.

Julián Castro is out of the race for president, but that effort left him well-positioned for future runs, including the one for the second spot on a national ticket later this year. If that doesn’t work out, there’s a fresh round of statewide races — from governor on down — on the ballot two years from now.

Castro attacked his image as a soft-serve campaigner during the presidential race, poking fellow Texan Beto O’Rourke on immigration policy and 77-year-old former Vice President Joe Biden on his memory. Castro said later that it was not a shot at Biden’s age, though some Democratic debate viewers saw it that way.

He never made much of a dent in the polls and never found traction in the financial primaries, where candidates go to find the financial patrons needed to compete in a modern presidential race. He started the contest, in practical terms, as the other Texan, behind the better-known former congressman from El Paso.

O’Rourke has a particularly ardent fan base, built during his 2018 run for U.S. Senate against Republican Ted Cruz. His favorable showing in that campaign got national attention and is one of the main reasons that some Democrats from outside Texas believe the state might be in play this year.

It fed some early excitement in O’Rourke’s presidential race, but his ardent fan base was louder than it was big in a presidential primary race with no Cruz to run against. President Donald Trump will have that role for the Democratic nominee in the general election, but in the crowded Democratic primary, O’Rourke didn’t stand out as an obvious alternative. The money wasn’t there, and neither was the support.

That’s also true of Castro, except that he did more to change the conversation in the primary. He put down a marker on the very structure of the Democratic race and whether states like Iowa and New Hampshire represent the party and the country. Castro ended with much better odds of getting on the national ticket once Democrats choose a presidential nominee.

O’Rourke did better as a presidential candidate if fundraising and most polls are your yardsticks, but Castro came out way ahead of his fellow Texan in the race for veep. O’Rourke fell from the heights while Castro climbed, comparatively speaking, from obscurity.

Now, less than a week after he left the race, Castro endorsed U.S. Sen. Elizabeth Warren of Massachusetts, sparking new conversations about his vice presidential prospects. If that doesn’t work out, he hasn’t punched any other leading candidate hard enough to keep himself out of consideration if she’s not the nominee. He barely laid a finger on anyone but Biden, the only remaining candidate who might nurse a grudge, and the “memory” moment doesn’t appear to have left lasting injury.

Castro’s from a big state. He’s Hispanic, potentially appealing to a large Democratic faction (though he didn’t catch on with those voters in polls on the way to the primaries). He would be a stark contrast to Vice President Mike Pence, assuming Pence stays on the ticket for Trump’s second run. And as he showed in the Democratic debates, he’s not afraid to go after a competitor.

The odds are still long. Castro never constructed the kind of support that would turn a contender’s head. His fundraising was meager. San Antonio, where he was mayor, is one of the 10 largest cities in the country, but he is untested on statewide ballots here or anywhere else. And there are lots of other people who might be politically attractive to a nominee shopping for a veep.

Make it a maybe.

Don’t forget about what’s happening at home, though. The 2018 results turned heads in both political parties in Texas. Republicans still won the statewide races, but they won closer races than anyone has seen in years. And with the notable exception of O’Rourke, who became a political celebrity with heavy news coverage of the Senate race and with the $80 million he was able to raise for it, the Republicans did poorly against largely unknown Democratic challengers.

It’s fair to say some of the Republican incumbents in those contests also remain largely unknown, but the party splits overall were tight. Democrats outdid their recent history in down-ballot races, winning two seats in Congress and a dozen in the Texas House away from Republicans.

Should 2020, whoever wins here, continue that trend, Republicans will enter 2022 bolstering their defenses. Democrats will be putting their challenges together, looking for candidates with some experience and with — they hope — big names. O’Rourke might make that list. Castro, unless that national ticket beckons, could easily be there to meet him.

This article was first published in The Texas Tribune.