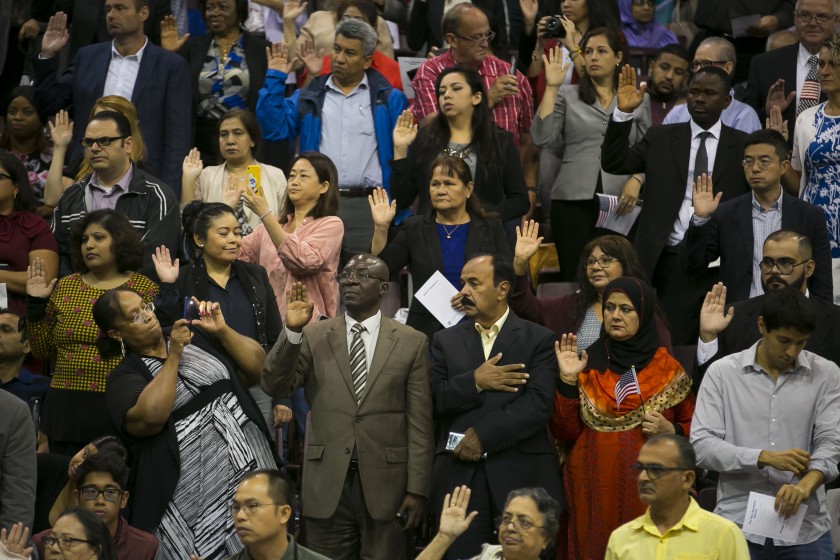 Annie Mulligan / For The Times

"Naturalized citizens — who share the full legal rights of natural-born citizens, except for the ability to become president — cast more than 8% of the ballots in the 2018 midterm elections."

HOUSTON — This is where a nation changes: a public school auditorium that moonlights as a veritable citizenship factory. At the M.O. Campbell Educational Center, where murals honoring the arts and sciences adorn the walls, U.S. immigration officials routinely hold packed naturalization ceremonies. Immigrants approved for citizenship walk in, take the oath of allegiance, and walk out as Americans — and as a small army of new immigrant voters.

“It will never, ever be easier to register than it is this morning,” U.S. District Judge Keith P. Ellison, who presided over a ceremony last month, told the 2,155 immigrants from more than 100 countries who had just taken their citizenship oaths. “The record for registrations is 89% of those who are sworn in…. Let’s see if we can break that record today.”

Amish Soni, a 34-year-old radiologist from India holding a small American flag, was one of the 85% who registered to vote that morning, aided by a volunteer from the League of Women Voters. He “definitely” plans to vote in 2020, partly because he thinks the healthcare system should be fixed, but also: “I’m not a big fan of Donald Trump.” And he’s far from the only one.

At ceremonies like these across the country, hundreds of thousands of immigrants are expected to receive their U.S. citizenship and become eligible to vote before November 2020, gently reshaping — and threatening — the electoral path that President Trump must thread to win reelection.

Over the last two decades, naturalized immigrants have grown into a force at the ballot box, with the United States recently swearing in more than 700,000 foreign-born U.S. citizens each year.

Naturalized citizens — who share the full legal rights of natural-born citizens, except for the ability to become president — cast more than 8% of the ballots in the 2018 midterm elections, almost double their share in the 1996 presidential contest, according to U.S. Census Bureau estimates.