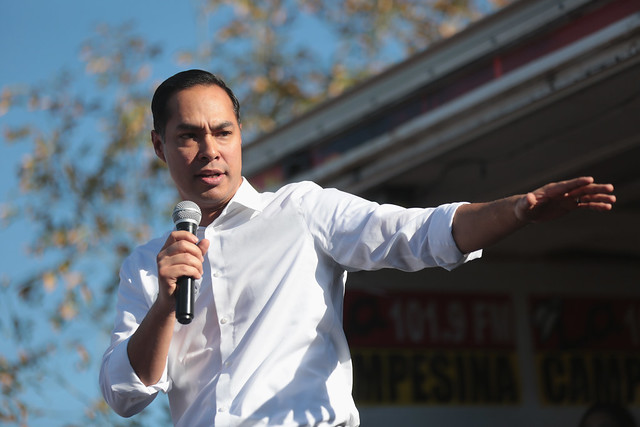 "For the only Latino in the race, the road to 2020 is lined by political hurdles that the white men running for president won't face."

EAST LOS ANGELES — By the time his plane touched down in California at the end of a whirlwind week, Julián Castro had set an early political benchmark in the crowded presidential race.

It was early April, and the former mayor and housing secretary had just released a sweeping immigration policy platform, garnering national headlines and widespread praise from immigration reform advocates who went as far as calling his proposals “exactly what we need in this moment.”

Castro was still struggling to break from the pack, but he was the first in the field with a detailed plan to tackle the one issue that could come to define the 2020 presidential campaign. Yet when he sat down for an interview on comedian Bill Maher’s television show, the host instead catalogued Castro’s proposal in terms that the white men also running for president would surely never face.

“My question is why did you pick that policy?” Maher questioned. “Because it would be like if Obama when he first came out, his first issue was reparations or affirmative action when he was trying to say, ‘I’m going to be the president of everybody.’”

Castro was characteristically judicious in his reaction, even as Maher went on to point out he believed that immigration was an “obvious issue” for Castro, who already had “those people.” Castro paused slightly as he began to answer, looking away for a beat as he searched for the right words.

“Well, I think people also want to know what’s close to your heart, and that’s close to my heart,” Castro replied before explaining that leading with an extensive immigration policy was a no-brainer.

“I grew up with a grandmother who came over from Mexico when she was 7 years old because her parents had died,” he went on. “My family has lived …