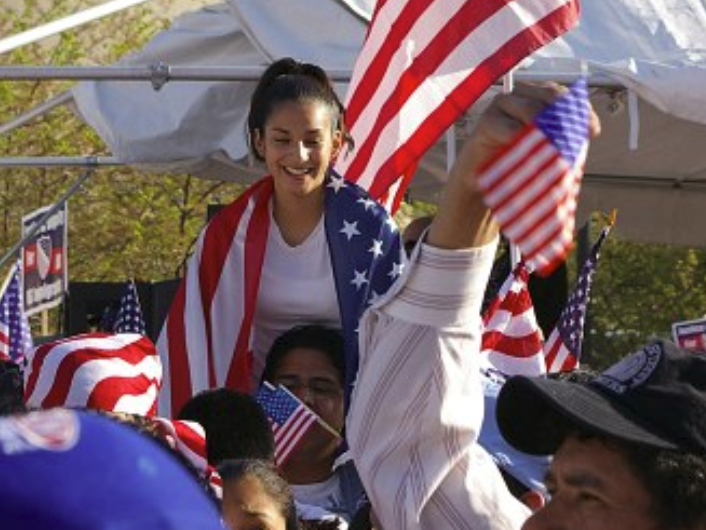 The Latino sleeping giant is a myth, it doesn’t exist as such, it isn’t asleep as we believe.

Somewhere deep in the bowels of Donald Trump’s political salt mines (This, of course, is pure conjecture. I don’t know that Trump has political salt mines or if they have bowels of any depth.) there is a small circle of dark-suited men busily calculating the nation’s electoral landscape (More conjecture, I imagine the dark-suited men to be sitting on stools, wearing tall and pointy dunce hats).

This, I have come to believe, is the main reason for Trump’s bullying, boisterous, nasty and tacky Tweets, comments and general state of being. According to the electoral landscape he has nothing to lose and much to gain by being, well, Trump.

The 2016 electoral vote-stack that put him in the White House is doing well – the Trump base is entrenched, in line, listening to Fox News and reading Trumpian Tweets as if they were mana for their collective mind. The electoral edge that Trump will need to keep him in the White House remains sharp, regardless of how loudly and vehemently the anti-Trump side rants.

The guys who I imagine sitting in Trump’s political-bowel know that their man can win again if he continues to rile the base. But I’m not concerned with them.

What’s gotten my attention is a box gathering dust in a corner of the cave where they sit. It’s marked “Latino vote” and has been tossed on a pile of stuff to be taken out and dumped. Somewhere in the box is a file labeled “Latino Sleeping Giant.” Trump and his henchmen had a good laugh when they tossed that file in the box. They’re convinced to the point of hysterics that the Latino giant will never wake up. And I don’t blame them for thinking that.

The sleeping Latino giant is a punchline many years in the making. I remember when political observers declared the 1980’s to be “the decade of the Latino.” I also remember the early 1990’s when those same people looked back over the decade just ended, scratched their heads and wondered why Latinos didn’t show up.

Every decade since has been promoted as the moment when Latinos wake-up and vote.

Almost eight years ago, at the beginning of 2011, the notoriously conservative Heritage Foundation set-up a Latino-targeted website called Nuestras Voces Latinas. On its landing page the foundation’s president, Ed Fulner, declared “The idea that liberal candidates, whether Republican or Democrat, can take their [U.S. Latino voters] support for granted is an insult, quite frankly.” Republicans were gearing-up for the 2012 presidential election and the Latino vote was a strategic target – Florida, Colorado, Nevada and New Mexico were important swing states and Latino voters were an important part of the plan to win them.

But the giant slept through that election, too.

Meanwhile and since, U.S. Latinos have been growing in number, swaying retail markets, skewing population calculations and slowly getting older. Let’s put this in context – by older I mean that the bulk of U.S. Latinos will have turned 18 in the past few years. So they can vote now.

The guys in the Trump political bowel believe it’ll never happen, and I agree with them, it won’t. That’s because the giant is a myth, it doesn’t exist as such, it isn’t asleep as we believe. The waking moment is a fable that’s been spread across political circles for generations. And it’s the wrong way to consider a demographic truth.

In the 2018 midterms the overall Latino vote increased by 174 percent, that’s according to the Democratic Congressional Campaign Committee (DCCC), as reported in The Guardian. “The Hispanic community will have a record level of representation on Capitol Hill, with at least 34 Democrats and eight Republicans in both chambers.”

And it still wasn’t enough to satisfy expectations.

Latinos don’t vote because many of them are not citizens, and because many others are young – either too young to vote or too young to care. This isn’t an indictment against young Latinos, it’s the reality of young people in general. But the bulk of young Latinos are slowly getting older and soon they will do what many Americans do as they age – they’ll get jobs, have families and pay mortgages – they’ll vote.

And it won’t be a roaring awakening, as we imagine a bear stirred from hibernation. The Latino tide has been rising for years, a little at a time. If the stool-sitting dunces would dust-off the Latino vote box and peak inside they’d see a lot of activity and they’d be able to predict the beginning of a tipping point. They’d see that in two years, in the 2020 election, young Latinos will begin to realize the importance of their vote, not because they’re Latino but because they’re millennials who are leaving their carefree teens and twenties behind.

We’ve all been ill-served by the sleeping giant myth and it’s time to put it away. The Latino vote will grow steadily and almost imperceptibly, and 2020 will give us the first hint of what’s to come.

The question, though, is whether the Latino vote will matter in rust-belt mid-America where the battle for the electoral vote will rage.

And that’s fodder for another time.