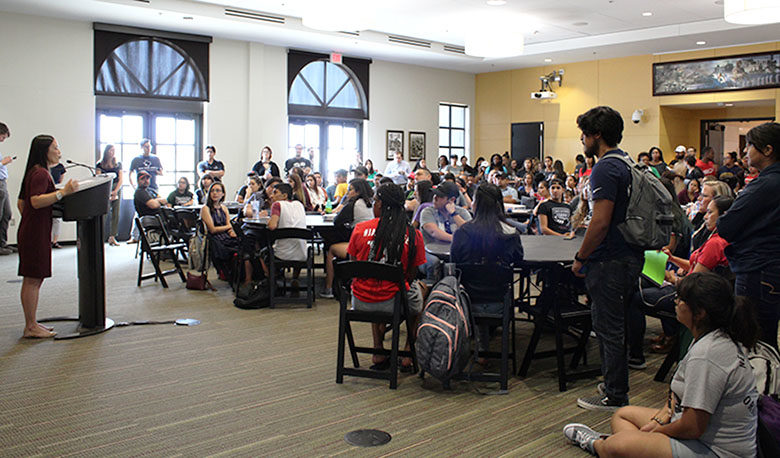 For Democratic candidate Gina Ortiz Jones, representation doesn’t “mean a more colorful picture, it means our voices, our experiences are at the table and impacting these decisions that affect our everyday lives.”

Ortiz Jones shared her views on the importance of diversity in politics, as well as immigration, border security, abortion, and gun laws in a town-hall event on Thursday, September 6, organized by the political science program at Texas A&M University-San Antonio.

“The key thing is to help students engage with the representatives that represent them in the political realm,” said Andrew Sanders, assistant professor of political science at A&M-San Antonio. “They are asking you to pay them to represent you in Congress, so you have to be aware.”

The voting ballot will contain statewide races including governor, attorney general, and U.S. senator. Then the ballot shifts to the congressional races, followed by county and city races.

Ortiz Jones aims to take the place of current District 23 House Representative, Congressman Will Hurd in the November midterm elections. The district is home to roughly 769,276 Texans and spans the southwestern portion of the state from the West Side of San Antonio westward to near El Paso.

According to Ortiz Jones, health care is the most talked about topic during her campaign. As a result of listening to the residents of District 23 about their concerns, she plans to combat the lack of healthcare and resources that currently exist in the district.

“A woman having a baby in Texas is five times more likely to die during that process than if she had the baby in California,” said Ortiz Jones in her opening remarks.

Question: “Can you explain your stance on abortion?”
Answer: “I believe that a decision like that is between a woman, her family, and her doctor.” – @GinaOrtizJones #comm3301

On the topic of higher education and skilled job training, she says she wants to do what is best for students and young adults.

“We can’t be setting up our young people for failure at such a young age,” she said. “Let’s invest in jobs that make them competitive, but also make Texas competitive.”

Her journey to politics started with humble beginnings in San Antonio. She was raised alongside her sister solely by their mother, lived in subsidized housing and received reduced lunch in school.

She is a proud graduate of John Jay High School and established a scholarship there named “Leadership through Service” for students who thrive academically in the San Antonio community. After graduating high school, she earned a four-year Air Force ROTC scholarship to Boston University.

Jones said her political aspirations comes from her drive to do something more for the greater good. She is willing to work with people across the aisle to get many important things done in Washington.

“There is no higher calling than public service… It’s about getting things done for the district as well as the country,” she said.

“In a country as resourceful and compassionate as we are, nobody should live in this country in fear.” –@GinaOrtizJones #comm3301

“So many people are crossing everyday… I don’t need a wall, I need a 3rd bridge”- Eagle Pass mayor via @GinaOrtizJones #comm3301

Students who attended the event said they were interested to find out more about Ortiz Jones, specifically issues she is fighting for and what she stands by. However, some students did not agree with what she had to say.

“I think she has good intentions, but honestly, I disagree with some of her politics,” said Robert Salazar, first-year math major. “I do not agree with the assault rifle ban, and me and her have a different view regarding the dreamers.”

The event is part of a new series promoted by the Political Science Program aimed at the education and awareness of politics among the A&M-San Antonio community. According to Sanders, they have “reached out to the Hurd office to host an event and are waiting for finalization with them.”

As for Ortiz Jones, she plans on continuing to campaign right up to election day November 6. She said young people must be aware of their politicians and political values because “they’ll be the ones living with the consequences for a long time… and you can’t complain if you don’t vote.”

Move Texas, a nonpartisan grassroots organization, is currently on campus encouraging students who are not registered to vote to become registered voters and have their voice heard. Sebastian Waddy, a volunteer with Move Texas, is optimistic about what kind of response his work will bring.

“This campus has been one of the more politically aware campuses I’ve seen outside of UTSA where we are based out of,” Waddy said. “We want to continue that momentum into the midterms so we can have a great voter turnout.”

This article was originally published in The Mesquite.

Raúl Plata is a senior Communications major with a minor in Mexican American Latinx Borderland Studies at Texas A&M University-San Antonio. Born and raised on the Southside of San Antonio, he’s familiar with the community around TAMU-SA. He is working on obtaining his bachelor’s degree to pursue a career in journalism as a reporter/journalist. Raúl is also a member of the National Society of Leadership and Success organization on campus. In his free time, he likes spending time with family and friends, attending local cultural events and binge-watching shows on Netflix and Hulu.