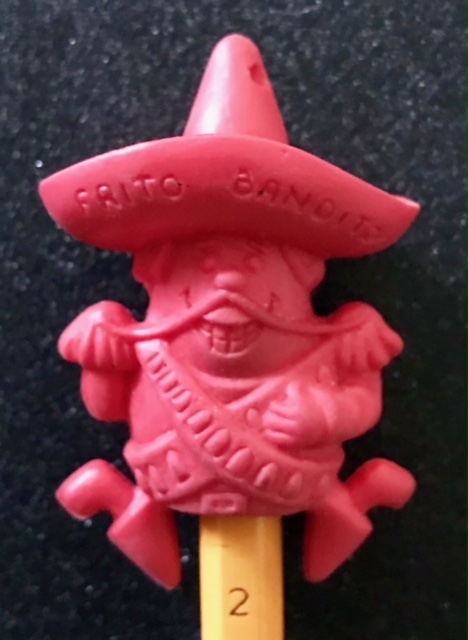 About his essay, “Donald Trump and the Frito Bandito ,” Ito Romo says, “In my Mexican American Literature class, one of my favorite lectures is entirely about corn. As you might well imagine, my students and I discuss all things corn from the time of its domestication in the Tehuacan Valley of Mexico as early as 2400 B.C. to the Taco Bell Dorito Locos Tacos of today. Sometime during our discussion, my students meet the Frito Bandito, the racist caricature star of the TV commercials that the Frito Lay Company ran from 1967 to 1971. This essay is about that . . . and about storytelling . . . and about telling your own stories before someone else tells them for you. Just ask Donald Trump.”

Since the signing of the Treaty of Guadalupe Hidalgo in 1848, those of us born and raised along the U.S. / Mexico border have been continually marginalized into a geographic and social no-man’s land.  For political and socio-economic reasons, Mexican Americans on the US / Mexico border have been negatively characterized in history, literature, television and film, and commerce: a story of the Mexican American border people packaged and sold not only to us, but also to the rest of the United States, via all aspects of popular culture.

Picture this, twenty-something second graders sitting in Mrs. Wise’s classroom at St. Peter’s Elementary School on the border in Laredo, Texas, a bunch of young and innocent Mexican American kids excitedly trading Frito Bandito pencil top erasers that came packaged in bags of Fritos Corn Chips.  For those of you who may not know what I’m referring to, imagine opening up a McDonald’s happy meal and digging in to find this treasure: a brightly colored, burly, squatty, man with exaggeratedly large ears and nose and teeth, wearing a giant sombrero and bandoliers, holding two giant guns, one in each hand—oh and let’s not forget the giant Frito Bandito mustache.  One of the many ironies here is that the C. E. Doolin family—the San founders of Fritos Corn Chips—bought the recipe and trademark from a Mexican American who sold fritos from a cart in San Antonio in 1932. ¨Frito¨ means “fried” in Spanish.

In his book, With His Pistol in His Hand, Américo Peredes (one of the most, if not the most, important Mexican American scholar of the 20th century) analyzes the image of the people of South Texas set forth in “the Anglo-Texan legend,” a myth perpetuated by writers like Frank Dobbie (American folklorist, writer, and newspaper columnist):

This legend is not a story told by word of mouth; in fact, again according to Paredes, “it is in print—in newspapers, magazines, and books—that it was circulated the most, . . . and it was in books that this stereotype has had its greatest influence and its longest life.” Paredes continues, “The earliest depictions of this savage Mexican were found in the war propaganda works of the 1830’s and 1840’s because of the approaching war between the US and Mexico.”

Paredes also tells us that historians, as they often do, also played an important role in popularizing and perpetuating the myth of the savage Mexican. Walter Prescott Webb, one the most notable Texas historians, had this to say about the Mexican in 1935:

Without disparagement, it may be said that there is a cruel streak in the Mexican nature, or so the history of Texas would lead one to believe. This cruelty may be a heritage from the Spanish of the Inquisition; it may, and doubtless should, be attributed partly to the Indian blood . . . The Mexican warrior . . . was, on the whole, inferior to the Comanche and wholly unequal to the Texan . . .  For making promises—and for breaking them—he had no peer.

So by the time I was seven years old, all of these negative stereotypes had made their way onto the top of my No. 2 pencil in the form of a Frito Bandito eraser. And there was more: who can forget the adorable Warner Brothers Looney Tunes cartoon characters Speedy Gonzalez and his cousin Slowpoke Rodriguez raiding a cheese factory on the American side of the border and the hijinks that ensued? And do you remember the lovable Taco Bell Chihuahua dressed as a Mexican revolutionary or a bandito and his famous line, “Yo quiero Taco Bell”? And even a little later in my young and optimistic life, while in college, I read American writer Jack Kerouac’s On the Road and what he had to say about Laredo, the city where I was born and lived:

Laredo was a sinister town that morning. All kinds of cab drivers and border rats [Speedy Gonzalez again!] wandered around, looking for opportunities. It was the bottom and dregs of America, where all the heavy villains sink . . .  Contraband brooded in the heavy syrup air . . . Cops were red-faced and sullen and sweaty . . . Waitresses were dirty and disgusted . . . It was three in the morning, and fellows with straw hats and white pants were lounging by the dozen against battered pocky storefronts.

Today, close to fifty years since we—young and naïve Mexican American school children—sat in our classroom and excitedly traded those Frito Bandito erasers, you’d think that things have changed, right? Enter Donald Trump riding majestically down that Trump Plaza escalator. From a podium, as he announced his entry into the race for the Republican nominee for President of the United States, he said, “When Mexico sends its people, they are not sending you their best.  They’re not sending. They’re not sending you. They’re sending people that have lots of problems, and they’re bringing all those problems with us. They’re bringing drugs. They’re bringing crime. They’re rapists. And some, I assume, are good people.”

And so, Dobbie’s Anglo-Texan legend continues to be re-written, added on to, substantiated with no facts whatsoever, with a new rhetoric of hate, and now sanctioned by our President—and by every Republican leader who didn’t speak out against Trump’s bigotry before the election, the 26 percent of Americans who voted for Trump, as well as the 47 percent of American voters who didn’t even bother to show up at the polls.

The truth is this: stories have power, and this long history of stories and the stereotypes of border culture they have invented and perpetuated have created a dark and very real world along the border whose living characters face unmitigated poverty, terrible access to even a sub-par education, almost non-existent health care, and living conditions that rival the poorest countries in the world. Today, we find a political figure on the national and international stage re-telling his own version of this very story, but the same fiction nonetheless: Mexicans are coming

My family has lived on the border since 1750 (and here is where I have to emphasize that I have the legal documents to prove it). There has been no border crossing here. We who live along the border have a long and glorious American / South Texas / Spanish / Mexican / indigenous heritage, and its rediscovery will force a dramatic change in this hateful public discourse that has thoroughly infiltrated the American lexicon, the very American psyche.

One would have thought that things would have changed by now, fifty-plus years later (and 267 years since my ancestors arrived here), but no, here I am again, hardly a child, yet still sitting in that second-grade classroom, imagining that first #2 pencil, bright red Frito Bandito eraser at the top.

Wish I could erase the last 8 months with it.

One would have thought that racism, misogyny, xenophobia, and hatred would no longer exist (we have Roombas, for goodness sakes). But a dying animal is a dangerous thing, and nothing is more dangerous than a dying animal that has been cornered—driven to snarl (at political rallies, on TV, in classrooms across the nation), driven to show what still lurks under skin and muscle and sinew.

Better get the horses ready. After all, “Ay, ay, ay, ay, I am the Frito Bandito,” and there’s a new sheriff in town.

[1] Supporters of Trump and alt-right “news” outlets have relied upon data from the U.S. Sentencing Commission when claiming that undocumented immigrants account for disturbingly high levels of violent crime in America. Yes, the Commission reported that undocumented immigrants were responsible for 9.2 percent of federal murder convictions in 2013, but that represents a grand total of only eight convictions. At the same time, in 2013, there were 11.2 million undocumented immigrants in the country. Even Janice Kephart, a researcher at the Center for Immigration Studies, which opposes any legislation that will grant legal status to undocumented immigrants and regularly testifies in Congress against them, has repeatedly claimed that “There’s no evidence that immigrants are either more or less likely to commit crimes than anyone else in the population.” In fact, FBI data indicates that between 1990 and 2013, when the population of undocumented immigrants grew at a fast rate, violent crimes (aggravated assault, robbery, rape, and murder) actually declined by 48 percent. (Alan Gomez, “Voices: How Violent Are Undocumented Immigrants?” USA Today, July 16, 2015; Walter Ewing (PhD), Daniel Martinez (PhD), and Ruben G. Rumbaut (PhD), “Special Report: The Criminalization of Immigration in the United States,” American Immigration Council, July 23, 2015).

This essay was first published in Iron Horse Review, Volume 19.1, “State of the Union”.

Ito Romo was born and raised on the border in Laredo, Texas. His recent work, dubbed “Chicano Gothic” and “Chicano Noir,” shows the dark and gritty life along Interstate 35 through South Texas, where his family has lived for nine generations. He lives in San Antonio and is Associate Professor of English and Communication Studies at St. Mary’s University. Romo received his PhD from Texas Tech University’s Creative Writing Program. He is the author of The Border is Burning (2013) and El Puente / The Bridge (2001), both published by University of New Mexico Press.