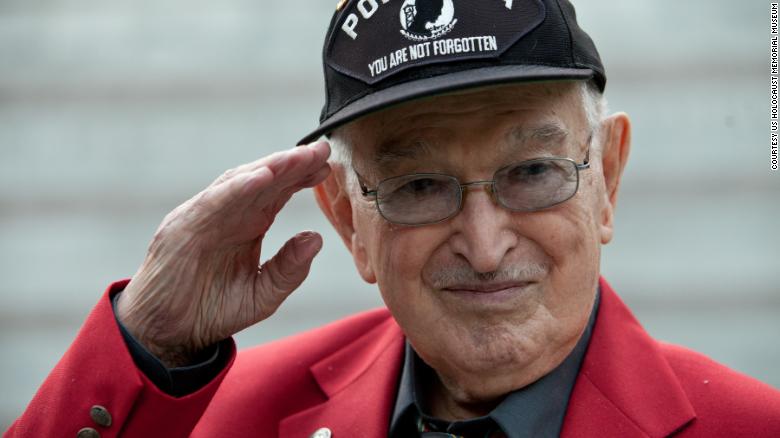 This is the wonderful story of an exemplary life. This is what it means to be Mexican-American. Read it all, share it.

Riverside, California (CNN)Two dozen veterans held US flags and stood at attention as they and dozens of family and friends bid farewell to Anthony Acevedo, one of the nation’s great war heroes.

Anthony C. Acevedo’s four children and two grandchildren escorted his flag-draped coffin as he came to rest at Riverside National Cemetery before the Prisoner of War Missing in Action Memorial.
Acevedo was a World War II medic and one of 350 US soldiers held in a Nazi slave labor camp. His journal proved critical in documenting the deaths and atrocities inside the camp.
He would become the first Mexican-American ever recognized as a Holocaust survivor. He kept one brutality secret, though, until the final months of his life.
At 93, his final words were: “How life tells a story.”
Anthony Acevedo documented the horrors inside a Nazi slave camp.
“Not only is he a great American, but he’s also an icon,” Col. Dan Forden, a chaplain at the VA Hospital in Loma Linda, told the crowd. “He’s the real measure of a man — this is the man we want to be.”
Three rifle volleys echoed across the hushed crowd. A bugler played “Taps” as veterans gave Acevedo one final salute. Each of Acevedo’s children were presented with folded flags, including the one from his coffin, before a bagpiper played “Amazing Grace.”
“If I can describe my father with one word, it would be heart,” Acevedo’s daughter, Rebeca Acevedo-Carlin, said at an earlier memorial service.
“What an incredible, genuine man he was,” said his son, Fernando Acevedo. “He would always say have faith, care for others and, more importantly, love one another. I saw my father act with love toward everyone.”
His story is one of bravery, honor and heroism — one forever etched in American history.

Anthony Acevedo was born July 31, 1924, in San Bernardino, California, to parents who had entered the country illegally from Mexico. The young family moved to nearby Pasadena, where Acevedo attended segregated schools with blacks, Asians and other Latinos. When his parents were deported back to Mexico in 1937, he went with them.
Acevedo said he had an undying love for his country beginning at an early age, and that he was determined to serve his homeland after Pearl Harbor.
But his love for America never wavered. After the Japanese bombed Pearl Harbor on December 7, 1941, Acevedo was determined to defend his homeland. At age 17, he crossed back into the United States and enlisted in the Army. He received medical training in Illinois and eventually landed in the European theater in October 1944, where he served as a medic.
“Was captured the 6th of January 1945,” he wrote in his first journal entry after being taken prisoner at the Battle of the Bulge.
The next month, 350 US soldiers — Jews and “undesirables,” including Acevedo — were separated from other prisoners of war. They were told they were going to a beautiful camp with live shows and a theater. Instead, they were put on cattle cars and transported to Berga, a slave labor subcamp of the notorious Buchenwald concentration camp in Germany where tens of thousands of Jews died.
The US soldiers worked 12-hour days in the final weeks of the war, digging tunnels for a sophisticated V-2 rocket factory. Soldiers were starved and brutalized with rubber hoses and bayonets. Some were fatally shot in the head with wooden bullets. The Nazis forced Acevedo to fill the holes in the heads of his fellow soldiers with wax to cover up the killings.
Acevedo used a fountain pen to record the atrocities in a diary, noting every US soldier’s death that he saw. About half of the soldiers sent to Berga survived, according to the United States Holocaust Memorial Museum.
Acevedo kept his medic’s band, cross and prayer book after the war. He donated the items to the US National Holocaust Memorial Museum in 2010.
During the next six decades, the US government never acknowledged its soldiers were held in a slave labor camp. But after Acevedo shared his account with CNN in 2008, the story went viral and the public demanded answers. Then-US Reps. Joe Baca of California and Spencer Bachus of Alabama pressed then-Army Secretary Pete Geren to recognize the soldiers.
Within months, Army Maj. Gen. Vincent Boles met with six Berga survivors at a POW event in Orlando, presenting them with flags flown over the Pentagon and honoring them for their sacrifice. One soldier received the Bronze Star, one of the nation’s highest medals.
“It wasn’t a prison camp. It was a slave labor camp,” Boles told them. “You were good soldiers and you were there for your nation.”
Acevedo boycotted the ceremony, saying he felt it should have been held in Washington.

In 2010, Acevedo became the first Mexican-American to register as a Holocaust survivor at the US Holocaust Memorial Museum, out of 225,000 registered there. Acevedo donated his diary, Red Cross medic’s band, cross and prayer book to the museum.
The museum recorded his oral history in English and Spanish. After Acevedo came forward, other Berga survivors did the same, recording their testimonies and donating historical artifacts. Previously, the museum only had a handful of testimonies from Berga; now it could add their stories to its permanent collection.
“We were able to finally tell their story in our exhibition for the first time because we now had physical evidence that we could show our visitors,” said Kyra Schuster, a museum curator.
Acevedo’s story also allowed Mexican-Americans to connect to the Holocaust in a way they never had before. Schuster still travels the country telling the story of Berga, and she says it’s always incredible when Latinos learn of Acevedo’s survival and courage.
When asked why he put his own life at risk by keeping a diary of every US soldier’s death he witnessed, Acevedo told the museum, “It was my moral obligation to do so.”
“That’s always stuck with me,” Schuster says, “because I think that defines who he is.
“He was this man who, despite the odds against him, despite what he was going through and experiencing, it was still important for him to take care of others, to document what was happening, to make sure the world knew what had happened to them.
“That’s why he spoke out later in life. He was always putting other people ahead of himself. That’s how I see him, and that is so admirable.”
READ MORE