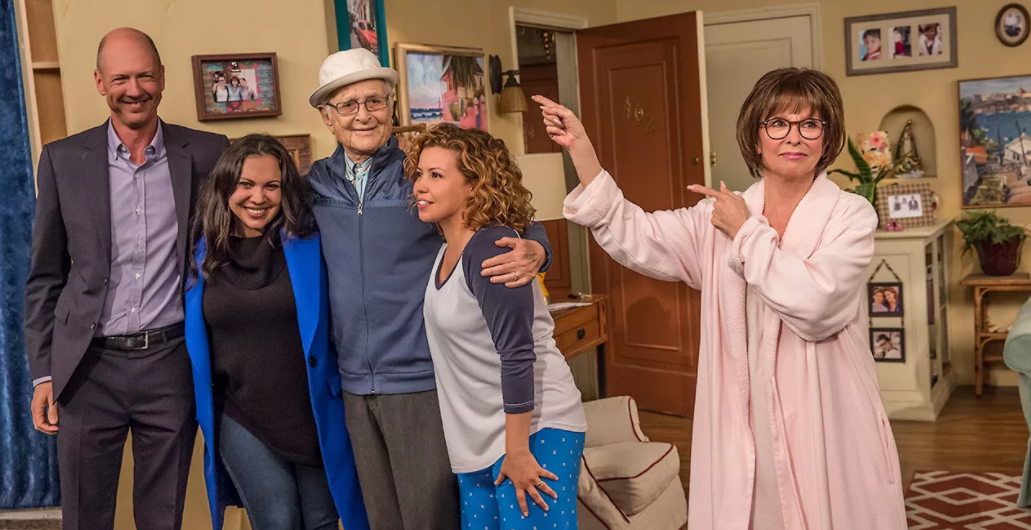 In the photo Rita Moreno points at Norman Lear who had the vision and cojones to make this project happen. We should also see that as a finger pointing to the spot where Latinos need to be, creating and green lighting true Latino stories.

Much like the loving Alvarez family they created, the writers of One Day at a Time work closely together, don’t always agree but love each other anyway. Their collective family experiences helped inform the creation of the characters we fell in love with last year, and shaped the series into one of the best things to binge watch on Netflix. Their influences are everywhere. According to one writer, Debby Wolfe, the kids of the show – Elena and Alex – are based on showrunners Mike Royce’s daughter and Gloria Calderon Kallett’s son.

Below, we got a glimpse at some of the family behind the Alvarez family, as told by show writers Michelle Badillo, Debby Wolfe, Dan Hernandez and showrunner, Gloria Calderon Kellett.

How did you join the writers room?

Gloria Calderon Kellett: I sat down with Norman Lear early on, and he’s such a wonderful curious man. He asked me to talk about my family and my own experience. My parents came here during Operation Pedro Pan in 1962. They thought they were going to be here for six months, and obviously, we’re still here. They made a life of it not speaking any English. I told him that story, and he asked if I was divorced – I’m not, I’m married – what would that look like for you? And I said my mom would stay with me. He asked what my mom was like, and I told him to picture Rita Moreno. My mom is very tiny, flaquita, always con maquillaje, always has earrings on even when she’s not leaving the house. She’s a badass. My dad is alive, and he’s a little annoyed that he’s dead on the show. They make my life possible. They come over to our house every day, they pick up the kids from school and they make dinner everyday. They’re an enormous part of my life. He liked this idea of the mom character, and he never had an opportunity to work with Rita. Thank goodness Norman reached out to her to do it.

ichelle Badillo: The showrunner, Gloria, was one of my professors in college. She became my mentor, and we kept in touch. I’d do things here and there for her like benefit plays or stage crew. When this show came up, she asked me and my writing partner [Caroline Levich] if we were still writing together and if we’d like to write for a show she was creating. We were like, ‘of course!’ In what universe would we ever say no and not have a job? We had never had a job before and had no idea how we were going to break in.

Debby Wolfe: I was working on a Disney Channel show called Best Friends Forever, and then I got a call from my agent who said, ‘Would you like to interview for a remake of a Norman Lear show?’ I instantly said yes, this is my dream! I grew up on his sitcoms. I was very excited, and then they said it was going to be a Latino show and that got me even more excited. This was the biggest interview I ever had in my career.

Dan Hernandez: Mike Royce told me and my writing partner, Benji [Samit], ‘I’ve got a weird project I’ve been cooking with this other talented writer, Gloria Calderon Kellett. It’s about a Cuban-American family, and it’s a remake of a Norman Lear show.’ I had worked with Mike on ‘1600 Penn’ and I’m Cuban-American, so he felt that I might be interested in getting involved with the show at an early stage. I was extremely interested.

What it’s like to work in the “One Day at a Time” writers’ room?

Calderon Kellett: Fortunately, we have such great writers.