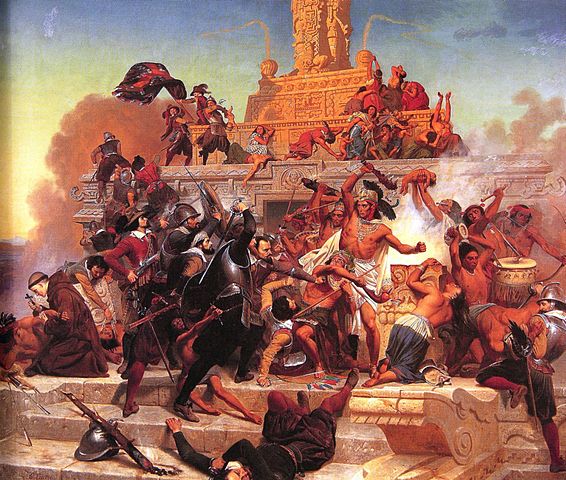 This is important, especially now when truth is so easily distorted. We can do better.

“Join us for this truly unforgettable experience where two worlds once collided forging a New World that would change the course of history.” —Promotional language from announcement of upcoming group Hernan Cortes heritage tour of Mexico.

When I received the email alerting me that there were only a few spots left on the tour, “The Route of Hernán Cortes: The Collision of Two Empires & the Forging of the New World,” I was puzzled and stunned. The tour, scheduled for next spring and inclusive of several stops in central Mexico, is a fundraiser for the New Mexico Museum Foundation, based in Santa Fe. Is it just me? Certainly I must not be the only Mestizo-Chicano who might view this sojourn as essentially a victory tour of Hernán Cortes’ deadly exploits in Mexico, an insensitive and hurtful reopening of deep, deep wounds.

Hernán Cortés was born in 1485 in Medellín, a city in present-day Extremadura, Spain. After failing at a formal education in Salamanca, he restlessly returns to Medellín. Biographer Francisco López de Gómara describes the young Cortés as “ruthless, haughty and mischievous,” characteristics that foreshadow his behavior once in the Americas. Inspired by Columbus’ exploits, Cortés sets his sights on crossing the Atlantic; however, his departure is delayed by an injury sustained while hurriedly escaping the bedroom of a married woman, another behavioral trait that would abet his conquering ways. The ambitious lad finally arrives in Quisqueya (Hispaniola), present-day Haiti and Dominican Republic. There he rapidly rises through the ranks, acquiring large plots of land and overseeing slaves, yet another unsightly notch on his conquistador helmet. Cortés then makes his way to Cuba, but really yearns for Mexico, spurred on by stories of gold, expansive land and other riches. He arrives in Yucatán in 1518 and hooks up with Malintzín, a Native woman pejoratively known as La Malinche, who serves as his concubine and translator (she bears his child). He proceeds to vanquish many Native peoples in present-day Yucatán, Tabasco and Veracruz, all the time scheming on how to topple the Aztec Empire, which he does soon afterwards.

The upcoming Cortés tour includes a stop in Cholula (like the hot sauce), then the second largest city in central Mexico. Cortés and his men arrive there in 1519, and, sending an unambiguous message to the Aztecs, promptly massacre thousands of unarmed Natives in the city’s zócalo (central square). While there the tour will focus on the noted pyramid of Tepanapa. I have a sense that it may skip the part about the murders Cortés orchestrates, unless contracted tour scholars from the Instituto Nacional de Antropología e Historiaconvey a more complete narrative about his stopover in Cholula. According to the tour’s promotional material, as subscriber, you will “immerse your senses and imagine the experience of these Spanish explorers, left in awe of the beauty of central Mexico.” How about imagining and interpreting scores of dead Native bodies and burning cities?

This April, I visited Badajoz and Alburquerque (it appears that an “r” was lost on the way to New Mexico), two cities in Extremadura, the land of well-known Spanish conquerors, including Cortés, Francisco Pizarro (his second cousin), Pedro de Valdivia and Vasco Nuñez de Balboa. I went to this province to cleanse myself spiritually of the malevolence perpetrated by these men, and others, upon the Native peoples of the Americas. I wanted to step on tierra extremeña and say to them, “I see you. Look at me. I am the product of the ‘New World’ that you helped ‘forge.’” It was an epiphany. I spent many lovely hours with some wonderful new friends in Badajoz. Over cañas (beers) and tapas, we had interesting discussions on a variety of subjects, including my pursuit of catharsis. They seemed perplexed, leaving me to ponder how/if education curricula in Spain addresses the dark side of the conquest.

I’ve labored in the nonprofit cultural world for over 35 years. I understand its demands and the necessity of successful private fundraising, but a tour that touts, even if unintentionally, the exploits of a conniving and brutal conquistador, is problematic for me. On the upside, it’s great to see the itinerary include several Native sites. I can only hope that tour organizers ensure that the Mexican experts give their patrons a comprehensive picture of what really happened in central Mexico nearly 500 years ago. The opportunities for important teaching moments are many, and necessary.