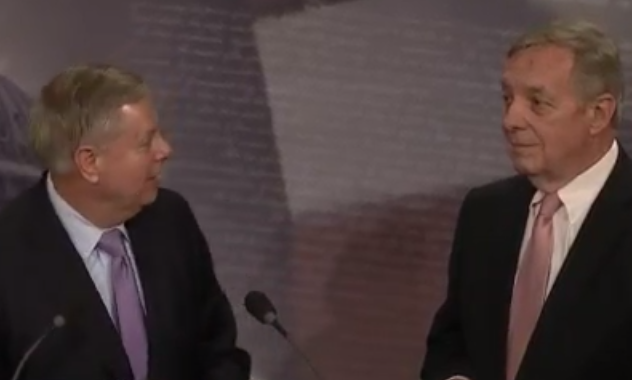 I’m looking at a perfect storm brewing for DREAMers. It’s been building for a while, but I think it’s going to hit soon.

Sen. Dick Durbin, D-Illinois, in 2001 floated the idea of protecting children who were brought to the U.S. by their undocumented parents. He introduced a bill that got nowhere. But the idea and subsequent legislation has been around in various forms since then.

President Obama forced the issue when he championed DACA and signed an executive order that gave DREAMers the protections that Durbin talked about. But it isn’t law, so a group of states, spearheaded by Texas, as these things usually are, is pressuring President Trump to fish or cut bait on DACA by September 5 or they’ll sue.

Yesterday Senators Durbin and Lyndsey Graham, R-South Carolina, filed a revamped DACA bill and pressured members of the Senate to move on it quickly.

It was Graham who laid the ultimatum for his Party:

“The question for the Republican Party is, what do we tell these people? How do we treat them? Here’s my answer. We treat them fairly. We do not pull the rug out from under them.”

And to President Trump:

“So to President Trump, you’re going to have to make a decision. The campaign is over. To the Republican Party, who are we? What do we believe? The moment of reckoning is coming. When they write the history of these times, I’m going to be with these kids.”

“The 2017 bill introduced Thursday would make young immigrants eligible for lawful permanent residence, a step toward citizenship. The immigrants must be longtime U.S. residents who are graduating from school or have a GED, or are pursuing higher education or serve in the military. They must pass background checks, show they are proficient in English and know U.S. history, and demonstrate that they haven’t committed a felony or other serious crime.”

As an aside, Graham joked that some members of his family would have a problem complying with the last two requirements.