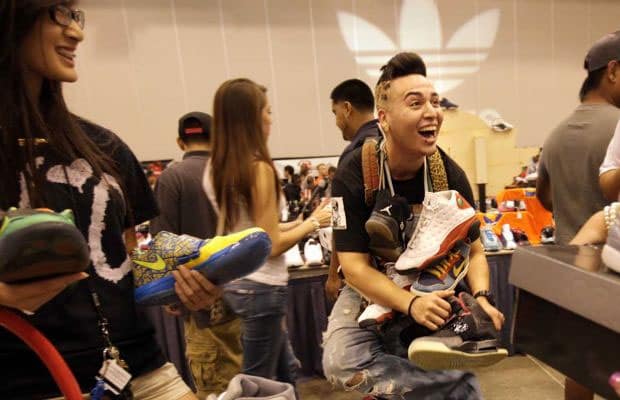 There’s news today from the Latino sneaker sales index, which is one of the most reliable economic indicators for U.S. Latinos. I found there’s a correlation between sneaker sales to Latinos and the GDP. It starts with news from Quartz:

“Research firm NPD Group says Latino customers accounted for about 23% of US [sneaker] sales in 2016. But since the start of 2017, NPD’s consumer-tracking service has registered a high-teens percentage decline in sales of sneakers to Hispanic consumers.”

This Latino sneaker sales index is serious stuff. Last year, before Trump, sneaker sales to Latinos increased by one point. Economists are looking at this for the ripple effect because U.S. Latinos spend more money on a daily basis than other groups – at last count we spend $96 dollars a day, where whites spend $88 and blacks $86.

And if the sneaker scale doesn’t convince you . . .

. . . there’s this from Brian Cornell, the CEO of Target.

Speaking at a tech conference in Aspen, Colorado, yesterday he said this about Latinos: “They are staying at home. They are going out less often, particularly along border towns in the United States. You’re seeing a change in behavior.” Cornell cited an NDP statistic that finds an 11 percent drop in Latino spending.

Target is fervently trying to figure out how to fix this.

Robert Kaplan, president and CEO of the Federal Reserve Bank of Dallas, spoke at a meeting of the Council on Foreign Relations and said that millions of immigrants are staying home and not shopping:

“On the margin — and it’s too soon for the data to pick it up but you hear it anecdotally — I believe we are going to see it, I believe those people are more likely to save than to spend. And those two effects have some muting effect on consumer spending and therefore GDP growth.”

Maybe “as the Latino sneaker sales index goes, so goes the GDP“ is a stretch, but I’m keeping an eye on it anyway.