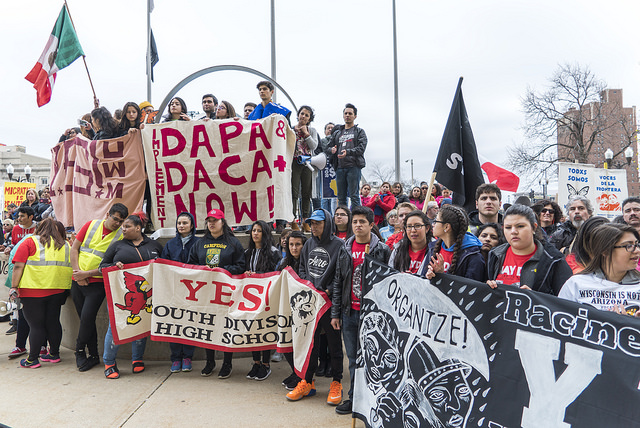 This offensive against DREAMers doesn't end. Now, Texas and another 9 states have asked Trump to rescind DACA. VL

By Julián Aguilar, The Texas Tribune

Texas Attorney General Ken Paxton and officials from nine other states on Thursday urged the Trump administration to end an Obama-era program that’s allowed hundreds of thousands of undocumented immigrants to live and work in the country without fear of being deported.

In a letter to U.S. Attorney General Jeff Sessions, Paxton urged the White House to rescind the 2012 Deferred Action for Childhood Arrivals, or DACA, program. DACA applies to undocumented immigrants that came to the country before they were 16 years old and were 30 or younger as of June 2012. It awards recipients a renewable, two-year work permit and a reprieve from deportation proceedings.

As of August 2016, more than 220,000 undocumented immigrants in Texas had applied for a permit or a renewal of one under the program, and nearly 200,000 of those have been approved, according to government statistics. It’s the second-highest total behind California’s estimated 387,000 applications and 359,000 approvals during the same time frame.

“We respectfully request that the Secretary of Homeland Security phase out the DACA program,” Paxton wrote. He was joined by the attorneys general of Arkansas, Alabama, Idaho, Kansas, Louisiana, Nebraska, South Carolina, Tennessee and West Virginia, as well as Idaho Gov. C.L. Otter.

“Specifically, we request that the Secretary of Homeland Security rescind the June 15, 2012 DACA memorandum and order that the Executive Branch will not renew or issue any new DACA or Expanded DACA permits in the future,” Paxton wrote.

The state officials added in the letter that rescinding the program won’t “require the federal government to remove any alien.”

The DACA initiative preceded a broader but ill-fated 2014 program, known as DAPA, which would have expanded the eligible population of the program and lengthened the work permits to three years. That program was never implemented after the state of Texas sued the Obama administration and successfully convinced a district judge and an appellate court that Obama overstepped his executive authority. Last year, the U.S. Supreme Court split on the matter and upheld the appellate court’s decision.

The Trump administration officially rescinded that policy earlier this month but said that DACA and some expanded DACA permits would remain in effect. Paxton argued in Thursday’s letter that that’s not good enough and warned that if the 2012 program isn’t rescinded, he and the other plaintiffs from the 2014 lawsuit would go back to court to settle the issue.

“If, by September 5, 2017, the Executive Branch agrees to rescind the June 15, 2012 DACA memorandum and not to renew or issue any new DACA or Expanded DACA permits in the future, then the plaintiffs that successfully challenged DAPA and Expanded DACA will voluntarily dismiss their lawsuit currently pending in the Southern District of Texas,” they write. “Otherwise, the complaint in that case will be amended to challenge both the DACA program and the remaining Expanded DACA permits.”