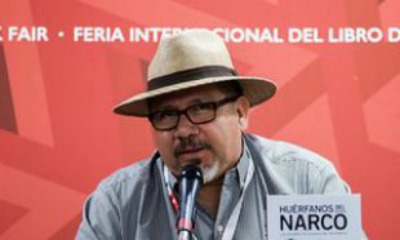 *NewsTaco publishes this piece by Sam Quiñones as part of a binational effort to keep attention focused on the murder of Mexican journalist Javier Valdez. VL

The rule of law is something to be treasured. It is precious beyond value. It has been achieved in relatively few countries and times through history. Yet little good comes without it. No real economic development, no great technological innovation, no slow march of prosperity, no public safety, no civic life.

After living in Mexico, it seems to me the rule of law is achieved through culture and a host of attitudes that give rise to prolonged (taxpayer funded) investment in infrastructure and government.

The rule of law is accomplished through facts on the ground, through small things working well. These include courts, prisons, police, civil service, decent public-employee salaries and training, but also parks, street lamps, storm drains, clear title to property, and much more — above all at the local level.

Most of this is what Mexico lacks or has neglected.

Superimposed on that civic weakness, and growing from it, has been the venomous presence of drug traffickers who have lost any discretion they once displayed and now behave with medieval cruelty. But what allowed them to go from hillbillies to national security threats in the span of a few decades is the lack of rule of law and all that I mention above. The result is the difference between 3000 murders in Juarez a few years back while El Paso tallied only 20 or so. On one side are strong civic institutions and well-motivated law enforcement of various stripes working together; on the other, infrastructure has gone begging due to lack of budget, corruption, lack of accountability, and a general belief that local government isn’t worth the time.

All that is what got Javier Valdez killed a month ago today.

Valdez, you may have read by now, was an esteemed, brave journalist who chronicled the drug world of Sinaloa in books and his newspaper Riodoce.

He was gunned down by masked men who accosted him as he was getting into his car not far from his newspaper. To make it seem as if robbery was the motive, they took his car, ditching it not far away. The computer and cell phone he was carrying have not been found, according to his newspaper.

I met Javier in 2014. I saw him again in February. We had breakfast to talk about things in Sinaloa. In the meantime, I had provided a promotional quote to the English-language version of his book Los Levantados (The Taken) because, despite knowing him only casually, I admired the work he and his newspaper, Riodoce, did consistently.

The Taken (University of Oklahoma Press), by the way, offers an amazing view of worlds few of us will enter. You should read it. The first story is about a Mayan Indian from Chiapas who fathered six pairs of twin girls and, to support them, was recruited to do some kind of work in Sinaloa, only to find that the work he was hired to do was not in agriculture, but in something connected to drug trafficking, though he never figured out what that was because a battle between cartels consumed the region where he was sent. Just stunning stories.

In the month since Javier’s death, we’ve heard the calls for the government to do more to protect journalists, end the impunity with which the underworld rules many parts of the country. I echo those calls.

But what ails Mexico isn’t only lack of political will. It is certainly that, but it is also a systematic neglect of local government that goes far back in the country’s long history. So even with the political will to find the killers of Javier Valdez, investigators would be hampered by the lack of tools that their counterparts in other countries take for granted.

There is no way to make good on calls of better investigations without a mighty strengthening of the local and regional public institutions that go into such investigations.

As we examine all the reasons why brave people like Javier Valdez have fallen, Mexico needs to look to its local government and build up its institutions, its capacity, its ability to protect its citizens and the ability to find justice for them when it cannot.

Ensuring that would be the greatest tribute to a brave man.