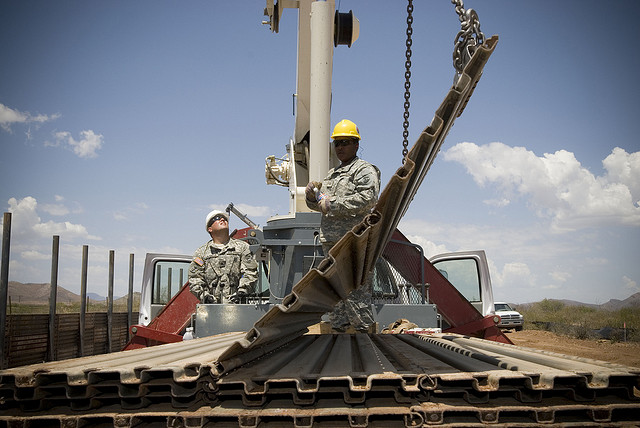 More than four months into his term, how close is President Donald Trump to making good on his signature promise to build a wall between the United States and Mexico?

Doesn’t look like it. On his fifth day in office, Trump ordered construction of the wall to begin using cash on hand. ProPublica reported last month that Customs and Border Protection (CBP) had just $20 million in their coffers for the project, which isn’t much when cost estimates for building a border wall range from $1 million to $21.6 million per mile.

The border between the United States and Mexico is more than 1,900 miles, and there’s already 694 miles of existing fence. CBP did not respond to inquiries about whether any stretch of new wall has been built, although there are no signs of any activity. Repairs to 40 miles of older fencing were approved in the 2017 funding bill passed earlier this month, but funds for the concrete barrier that so energized Trump’s voters have yet to materialize.

In March, CBP put out a call for proposals that asked for two different design options: the very solid, concrete type that Trump described on the trail, and the alternative-material, see-through wall favored by border experts. Finalists will be announced in June, and prototypes will be built shortly afterward.

For the project to truly get off the ground, Trump needs to convince either Mexico or Congress to give him the cash. Few lawmakers in either party have said that funding for the wall is a priority.

Is Mexico paying for the wall?

During the campaign, Trump promised that Mexico would fund it up front. Now, the president says Mexico will eventually pay for the wall, so any money Congress allocates is just a temporary expenditure.