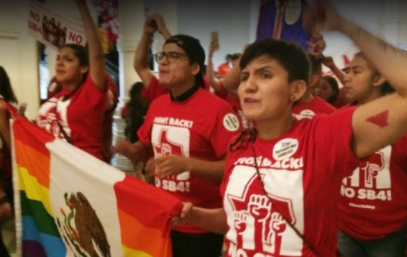 *Of all the stories written about the Memorial Day legislator scuffle in Texas, this one from  the Tribune News Service and published in Governing, has the most complete background and context. It picks up where other news reports stop. It’s worth the read.  But still missing from all the reports is the spark that started the scuffle. According to wittnesses the Latino lawmakers were trying to reason with Rinaldi, who is of Italian descent. They were drawing parallels between Italian and Mexican immigrants when Rinaldi said “But we love America,” or something to that effect – implying that citizens of Mexican descent don’t. That’s what triggered the dispute. VL

A brief but intense scuffle broke out on the Texas House floor just before the close of the legislative session Monday after a Dallas-area Republican enraged Democrats by telling them he called U.S. Immigration and Customs Enforcement when he saw signs from protesters that read, “I am illegal and here to stay.”

During the melee, Rep. Matt Rinaldi of Irving and Democratic Rep. Alfonso “Poncho” Nevarez threatened each other. Rinaldi said he would shoot Nevarez in self-defense after Nevarez said he would confront Rinaldi in the parking lot.

“He picked the wrong group of people to do that to on the wrong day,” said Nevarez, of Eagle Pass, before apologizing for the scuffle. “I’m sorry it happened, but the fact is, he’s asking for it.”

One Democratic lawmaker said Rinaldi threatened to “put a bullet in (Nevarez’s) head.” Rinaldi, a lawyer, said he is now under protection by the Department of Public Safety and would not confirm that’s what he said, but added, “I made it clear that if (Nevarez) attempted to, in his words, ‘get me, ‘ I would shoot him in self-defense.”

While Rinaldi said he called ICE as a response to protesters carrying signs identifying themselves as undocumented, some Democrats accused him of racial profiling.

“Matt Rinaldi looked into a House gallery full of Americans exercising their first amendment rights against SB 4 — Americans of all ages and all ethnicities — and he only saw ‘illegals,'” Rep. Ramon Romero, D-Fort Worth, said in a statement. “Let me be clear, this was a personal attack on me as a son of Mexican immigrants.”

The day is normally reserved for technical corrections and ceremonial good-byes, but the morning was interrupted by hundreds of protesters who denounced one of the GOP-controlled Legislature’s passage of a law already signed by Gov. Greg Abbott to allow law enforcement to ask people for their immigration status if detained.

Tensions have run high on the issue all year, as Democrats have decried Senate Bill 4 as a discriminatory attempt to target and instill fear in the state’s Latino communities.