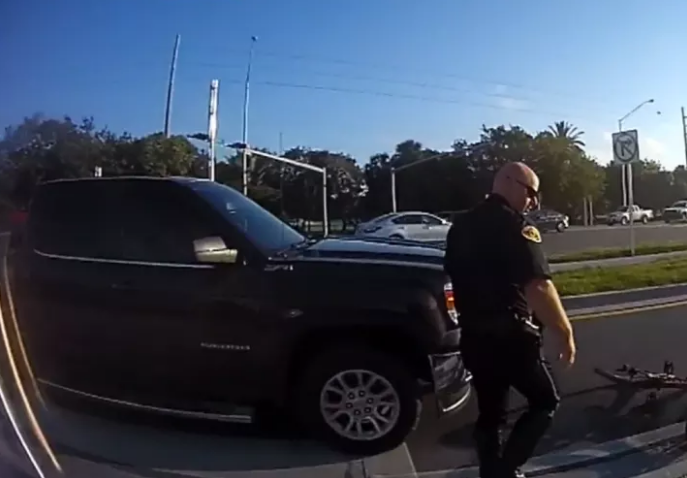 That’s what happened to Marcos Antonio Huete, 31, an immigrant from Honduras whose bicycle’s back-tire was hit by truck, crashing Huete to the asphalt.

A cop came to investigate, as they do in these matters, and began interrogating Huete while the man was still on the ground, injured. There’s a video where you can hear the police officer say “You illegal? Are you a legal citizen or no? Speak English? You got ID? Passport, visa, or what?”

“After being discharged from Lower Keys Medical Center in Key West [Florida] with bruises on his thighs and legs, his sister, Olga Huete, told BuzzFeed News that a sheriff’s deputy was waiting for them outside with her brother’s bike and told them they had to return to the scene of the crash.”

That’s when the Border Patrol nabbed him. They say he had been deported in 2010 and returned in 2015, so he was in the country illegally. That’s enough to get you deported again.

The local cops who covered the initial bike accident say they didn’t call or alert any immigration office. It’s weird how ICE and the Border Patrol materialize like that . . .

“The agents ordered breakfast – one had waffles and bacon, the other eggs and toast-and they complimented the food.”

-From a story in mlive about two plain clothed immigration officers who finished their breakfast at an Ann Arbor, MI, restaurant, then went into the kitchen and arrested three workers. This happened Wednesday, when the ICE agents sat at the restaurant’s counter where they had a clear view of the kitchen staff. A total of three workers at Sava’s restaurant were taken away. The agents had the picture of one man they were looking for, it hasn’t been clarified if the man in the picture was arrested. ICE spokespersons say their agents use “various techniques in their enforcement efforts.” This must be the Waffles and Coffee technique.