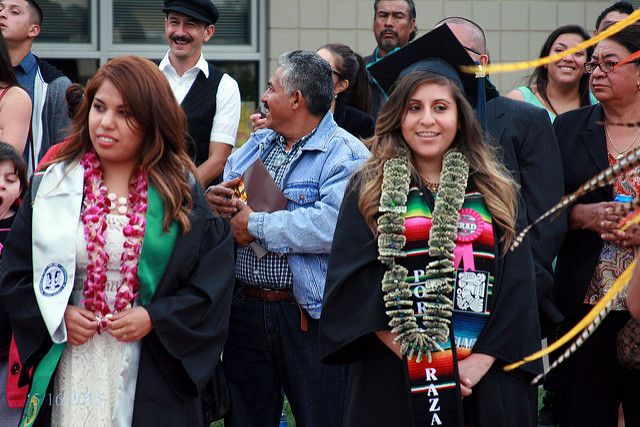 *This is worth reading for the sake of going beyond the Tweets to see how the Trumpian proposals will affect us in our daily lives. Planning on going to college? Trump could make that difficult. This is a good recap of how. VL

In recent years, Latinos have made significant gains in education. For example, they are now graduating from high school at higher rates, and their dropout rates are lower than ever before. Moreover, Latinos are enrolling in higher education in record numbers — surpassing their white and African-American counterparts.

Through a mix of policies and substantive initiatives, President Obama spurred forward the improvement of Latino education. During his eight years in office, he focused his efforts on areas that are often cited as having the most potential to improve Latino education, such as developing standards that helped ensure Latinos are ready for college and career, ending bullying in schools and communities, closing for-profit institutions that prey on vulnerable students, and providing college graduates relief from the burden of student loans.

Under the Trump administration, however, all of this progress toward improving the educational and career outcomes of Latino students is in danger of stalling and — much worse — reverting back to the disastrous educational attainment rates of the 1970s.

Here is just some of what is at stake.

Federal student aid. The previous administration made substantial contributions to bolster the federal student aid system. Pell Grants — the signature federal aid program — provided increased access to higher education for millions of Latino and low-income students across the country. In addition, the Obama administration worked to ease the burden of student loans through initiatives that reward students for their commitment to public service. President Trump’s recent actions have put these advancements in jeopardy through proposed reductions in federal student aid and the reversal of protections for student borrowers.

The 2018 budget proposal that the Trump administration released this week calls for the elimination of the Supplemental Educational Opportunity Grant program — the recipients of which are usually Pell-eligible students — and cuts the Federal Work-Study program by nearly half. Such measures could significantly restrict access to education for Latinos and other low-income and minority students.

DACA and DAPA. In June 2012, Obama signed an executive order on Deferred Action for Childhood Arrivals . . .

Amilcar Guzman is a third-year doctoral student in in higher education at the University of Maryland at College Park, where he studies the postsecondary outcomes of Latino college graduates. He is also the national president of the Congressional Hispanic Caucus Institute Alumni Association. He can be reached via email at amilguzman@gmail.com or on Twitter at @AmilcarGuzman1.