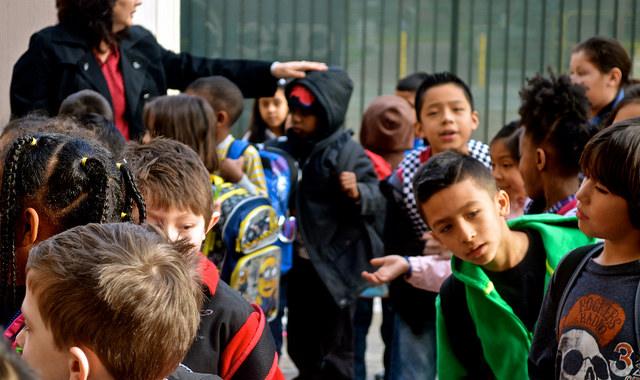 *Take this as a microcosm of the effect that Trumpism will have on Latino children. There is palpable fear and anxiety in schools, the kids are being affected. VL

U.S.-born Latino male middle school students who had familiarity with a controversial Arizona immigration-enforcement bill had more difficulty exhibiting proper behavior in the classroom, such as following instructions and staying quiet, according to a new study that includes a University of Kansas researcher.

The study published online recently in the journal Ethnic and Racial Studies is important in measuring young people’s awareness of laws and how the awareness might influence their academic achievement, according to Cecilia Menjívar, a KU Foundation Distinguished Professor of Sociology. She co-authored the study with Arizona State University researchers, including lead author Carlos Santos, assistant professor of counseling and counseling psychology.

“The effects of the students’ awareness of the immigration bill predicted lower levels of classroom regulatory behavior among the male students, and the effects did not vary depending on whether youth were first, second or third-generation immigrants,” Menjívar said. “Latino males, many of whom belong to immigrant families themselves or co-exist with immigrants in their communities and schools, are already at a higher risk for academic adjustment problems.”

The researchers over two years conducted a longitudinal study of 689 Latina and Latino middle school students from Arizona in the wake of the Arizona Legislature considering and passing Senate Bill 1070, which drew national attention by mandating that as part of the law police to verify the immigration status of any person they reasonably suspect of being in the country without proper documentation.