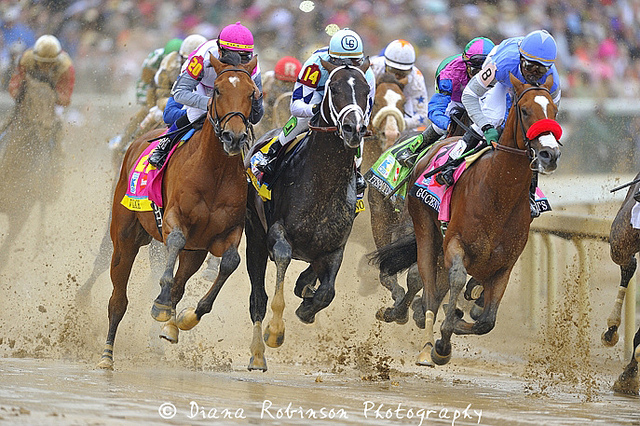 *The 143rd running of the Kentucky Derby is the coming weekend. Known as” The Greatest Two Minutes In Sports,” there will be 20 horses at the starting gate, half will be jockeyed by Latinos: John Velasquez (Always Dreaming); Victor Espinoza(Gormley); Javier Castellano (Gunnevera); Mario Gutierrez (Irap); Luis Saenz (J Boys Echo); Brian Hernandez Jr.(McCracken); Joel Rosario (Practical Joke); Jose Lezcano (State of Honor); Jose Ortiz (Tapwrit); and Ricardo Santana Jr. (Untrapped). One of the horses on the list, McCracken, is a favorite to win.

LOUISVILLE, Ky. — The backside of Churchill Downs hums with activity as workers clean stalls, bathe horses and lead the muscular animals on strolls to cool them down after workouts. The quiet is broken when they speak to each other and the horses — in Spanish.

Though they do their work a world away from the grandstand and Millionaire’s Row, where fans will sip mint juleps, don fancy hats and cheer for their Kentucky Derby favorites on the first Saturday in May, immigrants have become indispensable at Churchill Downs and other tracks, people in the industry say. Now, fear is spreading that a Trump administration crackdown on immigration will be a calamity both for the tracks and for many of their workers.

While there’s widespread acknowledgement that some jobs go to undocumented workers, many trainers rely on the H-2B visa program to supply immigrant workers legally, and the tightening of that program has contributed to a worker shortage.

Read more about Latinos in the Kentucky derby in NewsTaco. >>

Some argue that the presence of foreign workers has a downward drag on everybody else’s income. But Dale Romans, the second-winningest trainer in Churchill’s history, says he can’t find American workers to do the jobs.

“This is definitely a business that survives on an immigrant workforce,” Romans said. “Without it, I don’t know what we would do.”