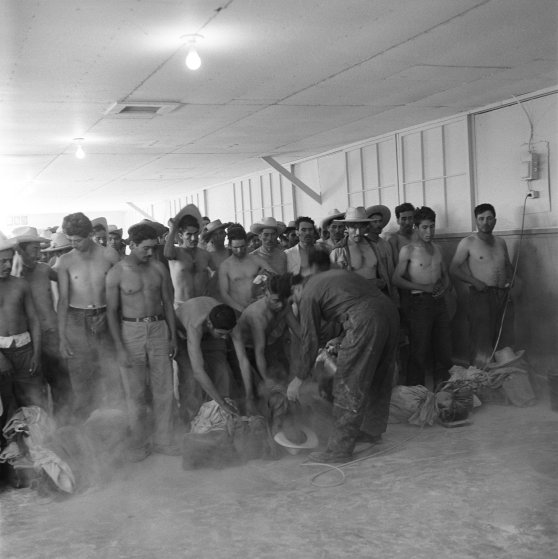 TIME magazine has published a series of revealing photographs of the Bracero program from 1957. Sixty years ago the Saturday Evening Post commissioned celebrity photographer Syd Avery to do a story on the immigrant program and the photos hadn’t been seen since.

. . .  when WWII caused a labor shortage in the U.S. This is from the story: “The accompanying article, by Fred Eldridge, explained how each year more than 400,000 legal Mexican laborers filled the role of ‘modern agricultural mercenary’ helping make the U.S. farming industry work.”

The next year, in 1965, the Hart-Keller Act drastically reduced the number of immigration slots given to people from the Western Hemisphere – Mexico was the most affected country. As Slate explains, “Before the law was passed, up to 50,000 Mexicans entered the U.S. each year as legal permanent residents while hundreds of thousandsmore entered on temporary work permits.”

The demand for labor in the U.S. didn’t subside and the influx of undocumented workers has grown exponentially. Now, with the Trump era of immigration, these photographs have gained a new poignancy.