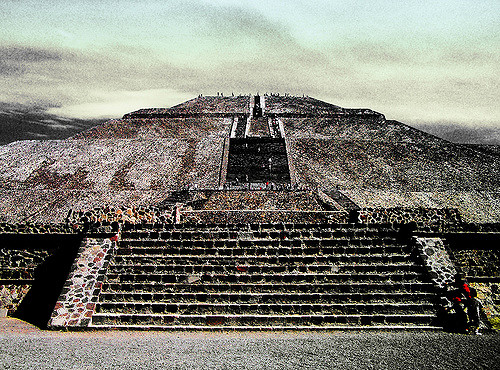 *Why you should read this: Because architecture tells stories, and our national spaces should include more than the typical Eurocentric Geek and Roman traditions. Because there is a rich Mesoamerican architectural tradition that should be part of the American story. VL

I’m not one for getting too riled up over commercial advertising. Sure, there’s the occasional outburst when I see an “Enchirito” advertised by a Mexican fast food chain. I’ve always had issues with liberal distortions of authentic Mexican dishes, but I guess it’s the price we of Mexican descent pay for having our food mainstreamed in popular culture. I’ve even seen advertisements at a major coffee shop franchise for a Chile Mocha, made with chile ancho, a principal ingredient in many mole recipes. The beat goes on; so do the shrugs.

However, the above-noted National Geographic ad really irked me. For the National Geographic to intimate that we owe our love of architecture solely to the Greeks is not only subjective, it is also offensive. Having the ad in my face made for a bothersome Metro ride to work.

[pullquote]For the National Geographic to intimate that we owe our love of architecture solely to the Greeks is not only subjective, it is also offensive.[/pullquote]

My love of architecture began when, as a youngster.

I climbed the pyramids of Teotihuacán. Located just outside Mexico City, the pyramids were built during the first millennium AD in what was then the largest city in the Pre-Columbian Americas. I explored the remnants of El Templo Mayor, the main temple of the Aztecs in their imperial city of Tenochtitlán, present-day Mexico City. While there, I also visited the renowned Museo Nacional de Antropología, where I learned about the architectural traditions of the Maya and other Mesoamerican civilizations. Later, I was able to tour Peru’s Machu Picchu, built by the Inka in the 15th century. This UNESCO World Heritage Site is as stunning an architectural achievement, and wonder, as there is to behold on this earth.

Pioneering Mexican architect Luis Barragán noted, “I have devoted myself to architecture as a sublime act of poetic imagination. Consequently, I am only a symbol for all those who have been touched by beauty. I think the ideal spaces must contain elements of magic, serenity, sorcery and mystery.” Barragán was a modernist, but it easy to see the underpinning devotion to Mesoamerican roots in his work. In the United States, we can see Barragán’s influence in the work of Ricardo Legorreta, whose firm designed the San Antonio Main Public Library, San José’s Children’s and Tech Museums, and Dallas’ Latino Cultural Center, among other public and private projects. Here again, the Pre-Columbian Mexican architectural stamp is undeniable. In most cases it drives principal design approaches and features.

There should be more than just Greek and Roman influences

To reiterate, I live in Washington D.C. Believe me, I’m all too familiar with the Greek and Roman architectural influences embedded in some of our best-known buildings and monuments. I’m not proud of the fact that I can’t distinguish between Ionic and Corinthian columns. Unfortunately, our capital is also home to architectural missteps, many of them government buildings. These building approaches “probably didn’t involve enough meetings,” as my youngest daughter, an architectural designer, might opine.

I work at the Smithsonian Institution, whose iconic Castle and adjacent Arts and Industries Building are the products of a vernacular architectural style that is borne of this country. You see different influences, which radiate Western European traditions, possibly drawing from Greek and Roman connections. In stark juxtaposition stands the new Smithsonian National Museum of African American History and Culture, which appropriately cries out, Africa! Nigerian David Adjaye, the building’s principal designer, brought a design approach reflecting an easily distinguishable African aesthetic that is refreshing, beautiful, and highly functional.

For the record, I don’t dislike Greek-influenced architecture, and I salute the National Geographic Society for making architectural history accessible to the public. Yet, because Greek civilization appears to drive pivotal sections of Nat Geo’s Eurocentric intellectual wheelhouse, we receive decidedly incomplete information and messages. It might be worth the Society’s while for its architectural content experts to go back to the drawing board to interrogate and contextualize diverse architectural traditions that are historically impactful, shape contemporary life, and that, consequently, also matter. In doing so, it will not only be able to highlight and promote multi-civilization architectural practices and achievements, it will also make for a more enjoyable Metro ride by the deserving curious.