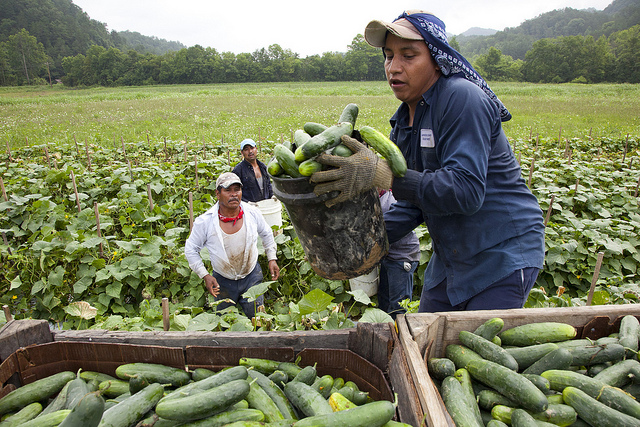 *Why you should read this: Because there’s a punchline here that not everyone will get. VL

When I talked to him about the economic effects of immigration last month, Center for Global Development migration expert Michael Clemens mentioned that he was working on research on agricultural migrant workers. That research is finally out, in the form of a report released by CGD and the Partnership for a New American Economy, a pro-immigration reform group started by Michael Bloomberg and Rupert Murdoch.

Clemens’s study focuses on the agricultural industry in North Carolina, and more specifically on the North Carolina Growers Association (NCGA), which supplies manual laborers to North Carolina farms. The NCGA is the nation’s largest user of the H-2A guest worker program, which is designed with agricultural workers in mind. Under that program’s regulations, Clemens explains, NCGA “must submit an application to the US Department of Labor proving that it has actively recruited US natives and native workers will not take NCGA jobs.”

That data is interesting, because it describes the labor market before any immigrant workers are recruited. That, as Clemens says, “allows us to assess the willingness of native workers to take farm jobs before they can even be offered to foreign workers, meaning that this study does not miss any impact caused by people who self-select out of an area or occupation because of competition with foreign workers.”

When native unemployed people are referred to NCGA, they’re almost without exception hired; between 1998 and 2011, 97 percent of referred applicants were hired. But they don’t tend to last. In 2011, 245 people were hired out of 268 referred, but only 163 (66.5 percent) of the hired applicants actually showed up to the first day of work. Worse, only seven lasted to the end of the growing season.

[Photo by Bread for the World/Flickr]