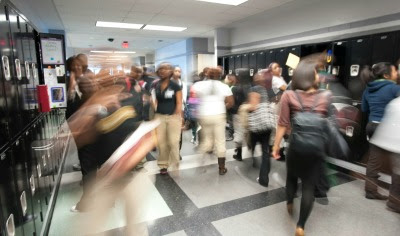 I’m struck with the power that reporters and politicos have to frame issues. I’ve read today several accounts of the same story, and I’ll reference the Baltimore Sun because the story in question is from that city:

Rape at Rockville High gets drawn into immigration debate

Here’s what happened. Two male students dragged a 14 year-old girl into a boy’s bathroom and raped her. It’s outrageous, it’s unconscionable, it should never have happened.

Here’s what was reported: One of the two boys who dragged the 14 year-old girl into the bathroom is undocumented.

Here’s what White House spokesman Sean Spicer said: “I think part of the reason that the president has made illegal immigration and crackdown such a big deal is because of tragedies like this.”

Spicer made that comment in response to a reporter’s question, but I couldn’t find a published story that identified the reporter. The only thing I found was this reference in the New York Times: “A local television news reporter asked Mr. Spicer at a news briefing on Tuesday whether reports of the attack made President Trump want to issue an executive order that would allow public schools to deny enrollment to undocumented immigrants. He used the opportunity to connect the case to the president’s restrictive immigration agenda.”

[pullquote]The rape of a minor in a public school shouldn’t be used as a weapon against immigrants.[/pullquote]

This is not an immigration story.

It angers me that I have to make that point, but if I don’t, if we don’t, the framing further inflames the false idea that immigrants cause crime. And that inflamed story affects the U.S. Latino community directly.

Here’s what the story should be:

And now there’s another story to go with the three listed above:

Here’s a Huffington Post graph you can use to correctly frame this story.

But if you insist on linking immigration and sexual assault, there’s this.

Latinos are reporting fewer sexual assaults amid a climate of fear in immigrant communities, LAPD says

It’s from the Los Angeles Times. LAPD Chief Charlie Beck went on the record Tuesday and said that “reports of sexual assault and domestic violence made by the city’s Latino residents have plummeted this year amid concerns that immigrants in the country illegally could risk deportation by interacting with police or testifying in court.”

Chief Beck says there’s been a 25 percent drop in sexual assault reports in the Los Angeles Latino community since Donald Trump took office in January promising a massive crack-down on undocumented immigrants. The number of domestic violence reports has decreased by 10 percent.

“In a statement released late Tuesday, ICE spokeswoman Virginia C. Kice dismissed Beck’s comments as speculative, pointing out that crime victims and witnesses who are in the country illegally are sometimes offered special visas. Federal officials also take a person’s status as a crime victim into consideration when debating whether to pursue deportation proceedings, she said.”

There haven’t been reports, yet, of other cities that have seen similar declines in crime reports in Latino communities.