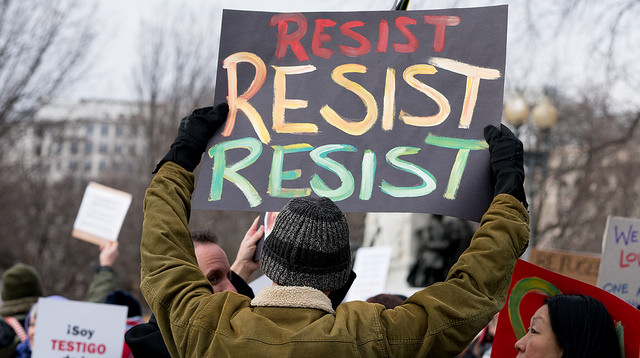 *Why you should read this: Because this kind of analysis  is missing from mainstream media. Because there’s momentum building across the country. VL

After Immigration and Customs Enforcement agents arrested Guadalupe García de Rayos during her regularly scheduled check-in with the agency, the 36-year-old mother of two burst into the national spotlight after activists put their bodies on the line in an attempt to stop her deportation. Unfortunately, their protests didn’t deter the government from deporting Lupita. But as one of the first undocumented immigrants affected by President Donald Trump’s new deportation order – which expands the definition of “criminal alien” to encompass a wider range of people and not just those who pose a public or national safety threat, had ties to criminal gangs, and committed a series of felonies or minor crimes – this case could serve as a model of what resistance may look like in our current political climate. And on Thursday evening, activists once again showed the fight for immigrants’ rights is relentless work in the era of Trump.

Lawyers, however, dispute this. Karla Navarrete, a lawyer with the Coalition for Humane Immigrant Rights of Los Angeles (CHIRLA) said she as well as other immigration lawyers have seen an increase in calls from families of those in ICE custody. CHIRLA spokesman Jorge-Mario Cabrera said that in a typical day, the coalition only learns of a few arrests daily, according to KPCC. Navarrete adds that not all those arrested have convictions, like a man detained in Van Nuys. “This person has an old deportation order from 2011, I believe,” she said. “And they have identified him and picked him up. He has no convictions, but he has a deportation order.” Additionally, ICE isn’t allowing those detained to contact their lawyers, CHIRLA stated.