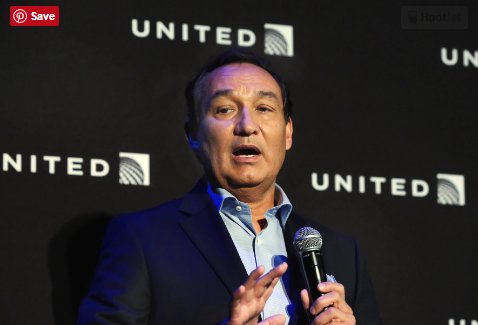 *Why you should read this: Because it’s proof a trend. Because U.S. Latinos, from non-profit activists to high-powered CEO’s to Latina students and workers are coming together in their vocal opposition to Trump. VL

The Trump administration’s immigration policies are “damning and damaging” to the US, Oscar Munoz, the chief executive of United Airlines, said.

Munoz, who is Mexican-American, made the comments during a wide-ranging interview with Business Insider last week.

He talked about Trump’s plan to build a wall on the US’s southern border as well as his executive order temporarily barring immigrants from seven majority-Muslim countries.

Munoz also discussed how the executive order has created unwelcome complications for his company.

Over the past few weeks, the Trump administration has moved swiftly on a laundry list of campaign promises through a wave of executive orders. Perhaps most controversial among them is the 90-day ban on immigration, including refugees, from seven countries.

“And so nobody thought through those things. I just wished and hoped that we could do it a little more thoughtfully.”

[pullquote]Uncertainty always creates doubt, and doubt creates fear. And if you do that, yes, people are just going to stay home.[/pullquote]

Munoz lamented the fact that his employees and others in the travel industry have been forced to deal with the day-to-day chaos created by the executive order.

From his perspective, it’s an order whose efficacy is debatable.

“The retort is that, ‘Well, you are going to let the bad guys in,'” Munoz said. “Well, there are a lot of facts that support that — of all the terrorist activities in this country since 9/11 — most have been caused by American citizens radicalized by policies implemented by [past] administrations.”

On the business front, Munoz said he believes the uncertainty surrounding the administration’s somewhat erratic behavior has had a direct effect on the airline in the form of reduced bookings to certain destinations.

“There’s no question that the uncertainty of what this administration says versus what they actually do … can be clearly seen,” the airline boss told us.

“People are not ‘scared’ — but maybe that is the word — to fly because they don’t know what’s going to happen when they (try to) come back.”

“Uncertainty always creates doubt, and doubt creates fear. And if you do that, yes, people are just going to stay home,” Munoz added.

As the most prominent Mexican-American CEO in the US, Munoz is fundamentally opposed to the wall Mr. Trump has threatened to build along the Mexican border.

“Clearly, on a visceral human front, I oppose any wall, anywhere, between any people — period,” he said. But on a more practical level Munoz questions whether a wall would actually make for a safer border.

“And then the efficacy and efficiency of something like that sounds good, but having traveled around there — the terrain — I don’t know how you are actually going to build any kind of barrier that makes sense across such an incredible length. I don’t know how that’s going to help,” Munoz told us.

[pullquote]We start building walls or even creating the concept of walls, it starts making it OK for you to build personal walls at work or with your neighbors. I think that’s damning and damaging to the country we all know is great because of that diversity and not despite of it.[/pullquote]

The United CEO praised the border patrol for their hard work, and remarked that their efforts to secure our nation’s borders have been relatively successful as “people sneaking across” to the US is but a small portion of the country’s immigration issues.

Munoz believes that the symbolism of Trump’s border wall is far more problematic for the US than anything else associated with the proposal.

“[When] we start building walls or even creating the concept of walls, it starts making it OK for you to build personal walls at work or with your neighbors,” Munoz said. “I think that’s damning and damaging to the country we all know is great because of that diversity and not despite of it.”