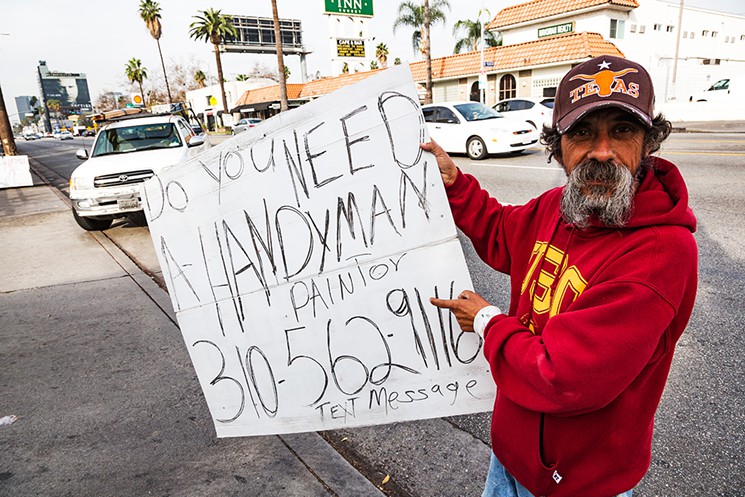 *Why you should read this: Because this is real, it’s happening and we should be aware. Because vigilantes will prey on the most vulnerable. Because information should lead to action. VL

On a Monday afternoon two weeks after the election, Ubaldo Hernández, a 67-year-old day laborer from Guatemala, was waiting for work at the Hollywood Community Job Center when he noticed a man across the street taking pictures. Then the man started to make his way toward the center, located in a fenced-in area on the shoulder of the road behind the Home Depot.

Hernández was sitting with two other workers at an outdoor picnic table. Technically the center is closed on Mondays, when the site coordinator has the day off. But the winter slowdown in L.A. started early this year, and Hernández and the others, who hadn’t worked in days, came and opened the center themselves.

At first, Hernández thought that lingering at the center on the odd chance of securing work was about to pay off. The man crossing the street, he remembers thinking, must be a prospective employer.

“I told my compañeros, ‘Look, he’s coming to hire workers for a job,'” Hernández recalls.

[pullquote]Organizers noted a rise in anti-immigrant sentiment in the days immediately following the election.[/pullquote]

The man was tallish and white, with streaks of gray in his hair. He walked past the workmen, not acknowledging them, and headed straight for the construction trailer where the office is. Since the site coordinator had the day off, no one was in the office. So Hernández approached the doorway to see if he could help.

He says he saw the man leaning over the day’s attendance sheets in the office and using his cellphone to photograph the names of day laborers. When the man realized he had been discovered, he brushed past Hernández and ran to get into a van on Fernwood Avenue; the waiting driver then sped away.

According to other workers at the center that day, the van’s rear license plate was covered with a piece of paper.

Hernández says that he stood frozen in place. More than 20 years ago, he fled the armed conflict in Guatemala, which killed hundreds of thousands in the 1970s, ’80s and ’90s. He was shaken, and his instinct told him the intruder was an undercover cop.

Site coordinator Danny Chavez convinced Hernández that the police in L.A. don’t behave that way and that the intruder wasn’t a cop. Both Chavez and the center’s director say they believe the man and the driver most likely were anti-immigration vigilantes on a spying mission.
Day laborer organizers in L.A. say the incident at the Hollywood center is part of a backlash against day laborers since the election. President-elect Donald Trump has vowed to deport from the United States as many as 3 million undocumented immigrants. And the president-elect’s inciting rhetoric — calling Mexicans drug dealers, murderers and rapists — is emboldening vigilantism against day laborers across the country. Though not all day laborers are undocumented, many are, and the visibility that comes from the act of seeking work in public places makes them the subject of policy disagreements about the enforcement of federal immigration law.