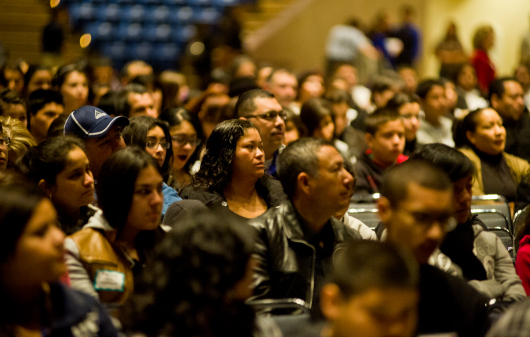 *We’ve been referring to the study mentioned in this piece all week on NewsTaco. Our Taquista friends at the Latino Donor Collaborative, who sponsored the study, sent us a copy early in thew week. What we didn’t know, and what this story reveals, is that the author of the study is on the Trump transition team. This is good news because his study makes a case for the positive Latinos contributions to the U.S. overall. Let’s hope the president-in-waiting is listening. VL

One of the most pervasive stereotypes about the Latino community is that they are a drain on the United States’ economy. But a new report titled “Making America Rich Again: The Latino Effect on Economic Growth” finds that it’s actually quite the opposite. Authored by Jeffrey Eisenach – a member of Donald Trump’s transition team – the 55-page report details how the Latino population is contributing to the US now and how it will continue to do so in the future. “This study presents a comprehensive analysis of the contribution made by Latino Americans,” the introduction reads. “The US Latino population is growing, young, increasingly educated, employed, connected, entrepreneurial, and upwardly mobile in terms of income as well as consumption.”

According to Yahoo, the Latino Donor Collaborative (LDC) and the Royal Bank of Canada commissioned the report. It comes at a time when anti-Latino sentiment are running high. President-elect Donald Trump spent most of his campaign generalizing the Latino population – calling them rapists and accusing them of stealing jobs. LDC founder Sol Trujillo funded this study to debunk harmful Latino stereotypes.

For Eisenach – a lover of data – this study allowed him to piece together interesting bits of information that may not tell a story when presented individually. For example, we’ve known for some time that Latino’s purchasing power exceeds the $1 trillion mark or that the population is younger than other ethnic groups. But it’s stunning to see a complete breakdown of how one demographic has contributed to the United States. “The data surrounding Latinos’ economic implications pull together a story that’s compelling, pervasive and deep. Especially because the average Latino is nine years younger than the overall population, we know that this demographic will be with us for a while, and we can take advantage of that,” Eisenach said.

While there’s a lot of really interesting pieces of information in this study (and it’s worth checking out in its entirety), here are five ways Latinos are increasingly crucial to the success of the United States: “To put Hispanic buying power into context, Figure 38 compares the buying power of American Latinos against the Gross Domestic Products of the 15 largest economies in the world. If US Latino consumers were a country, they would represent the world’s fourteenth largest economy—ahead of both Spain and Mexico, and approximately equal to the GDP of the Russian Federation,” the report reads.

On a Younger Latino Population “Throughout the western world, birthrates are declining, population growth is stagnant, andmedian ages are rising. Thanks mostly to Latinos, America is the exception to the rule,” the report adds. “As shown in Figure 8, Latinos are by far the youngest major ethnic group in the US, with amedian age in 2015 of 28 years old—nine years younger than the overall median age of 37 yearsold, and a remarkable 15 years younger than the median age among whites.”