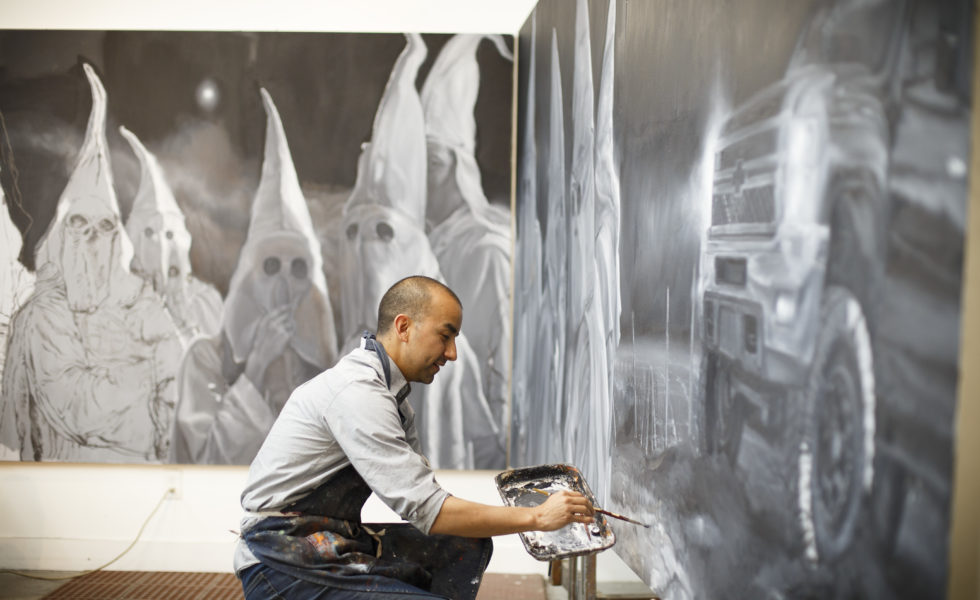 *Why did a chicano artist from San Antonio take on the KKK? We’re glad he did. VL

It is astonishing the lengths to which a person, or a people, will go in order to avoid a truthful mirror.
—James Baldwin

Recently, I visited the San Antonio studio of artist Vincent Valdez. He was putting the final touches on a massive five-panel painting, titled The City I and II. I’d previously read about the work in development in the editorial page of The New York Times—the first time I’ve seen the arts matter enough to make onto an editorial page. The City series is as stunning as it is well executed in capturing an evening gathering of a multigenerational Ku Klux Klan (KKK) coterie near the dump of an unnamed city. Most of group—the college graduate, the mother, the baby in her arms, the armed warrior, the banner holder, the beer drinker, the torch bearer, the Nazi saluter, the executive checking his cell phone—in full-hooded regalia, peer out at the viewer. A pretty ominous assemblage.

These are hard paintings to deal with, just like all that the Klan represents as an archetypal American experience and symbol. Although slavery was abolished in this country in 1865, the inbred feeling of superiority and continuing denial over the possible fulfillment of the Bill of Rights for the descendants of enslaved Africans, found institutionalized expression during the Jim Crow period that followed the Civil War. That expression also found a home within the most sinister embodied KKK practice, ritualized murder—lynching.

Why is a Chicano artist from San Antonio taking on the legacy of the KKK? Why now? Julian Bond, historian and civil rights worker, once noted, “Some say the Klan today should just be ignored. Frankly, I’d like to do that. I’m tired of wasting my time on the KKK. I have better things to do. But history won’t let me ignore current events. Those who would use violence to deny others their rights can’t be ignored.” In 2013, Vincent Valdez completed The Strangest Fruit, a series of realistic life-size panels of people known by the artist in hanging positions placing them in an historical context—the lynching of over 500 Mexicans in Texas and California—metaphorically illustrating the persecution and oppression felt by a good number of contemporary Latinos in the U.S.

In 2011, Valdez heard Gil Scott Heron’s poem-song, “The Klan.” Valdez comments on the piece, “‘It’s not easy to be free. It’s not easy to be free.’ This, too, is the lyric that struck me the most. I couldn’t shake it from my mind. The power and the simplicity of this statement ring true. It really isn’t easy to be free. I was so moved by the song that I sought to visually respond to its lyrics.” In his response to Heron’s poem, The City avoids overt reference to Klan violence. Rather, the series prompts the viewer to contemplate a number of societal perils that go beyond white supremacism. These threats include those associated with segregationist urban decay—the plotting and location of train tracks, city dumps, land claimed through eminent domain, city jails, industrial waste storage facilities, underfunded schools, and public housing—elements of the traditional American landscape that have conspired to keep populations divided along racial and economic class lines.

Perhaps the most disturbing realization conveyed in The City is that behind the hooded guises, these individuals could be average citizens—businessmen, parents, community leaders, church members, academics, police officers, neighbors. Valdez was not interested in portraying another sinister portrait of Klansmen. Instead, he exposes them, stripping them of their disguises without literally doing so. Valdez notes further, “The City is a testament of what I witness in American society. I think it is safe to say that much of my work resonates like an alarm that rings nonstop in my head. I must depict what I witness. This is my call to action, to get up and speak up.”

In 1930, artist Philip Guston completed The Conspirators, which starkly represents Klansmen at a lynching of an African American man next to Christ-on-the-Cross figure. Later in 1969, Guston produced City Limits, a three-man crew of cartoonish figures in white hoods cruising around in a beat up pink car with no destination in mind. The Guston paintings, coupled with the words of Scott-Heron, sent Valdez into a deep exploration into a part of America that Julian Bond asserts can’t be ignored.

As witness and activist-creative, Valdez joins the ranks of great American painters who insist on holding up a truthful mirror to the American experience, one into which we all need to deeply gaze.

The City I and II are under consideration for purchase by a major art institution in the United States, and may be available for touring.

Eduardo Díaz is the director of the Smithsonian Latino Center and a 30-year veteran of arts administration. The Latino Center works to increase and enhance Latino presence, research and scholarship at the Smithsonian Institution by sponsoring, developing and promoting exhibitions, collections, research and public programs that focus on the Latino experience. Díaz is an advisor to the Smithsonian’s Secretary and Under Secretary for History, Art and Culture as well as to Congress and other government agencies on a range of cultural development issues related to Latino communities in the United States and their impact on diverse countries of origin.

[Photo courtesy of The Texas Observer]