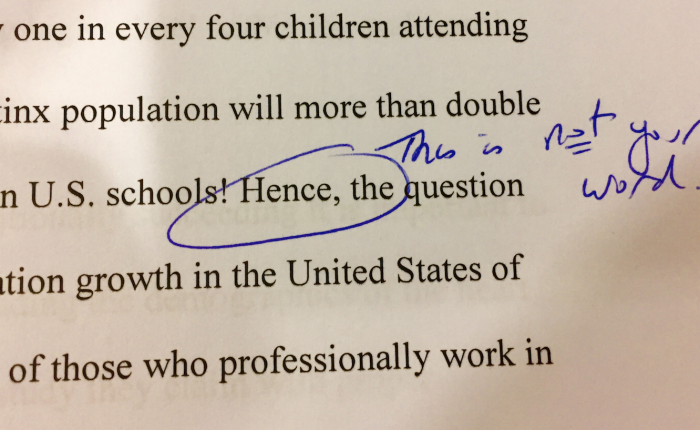 *Ray Salazar says the professor needs to apologize to Tiffany Martinez, but she should apologize to hersellf as well for not “recognizing their academic self-worth.” Think he’s right? VL

I read a disturbing description of poor judgment on a teacher’s—a professor’s—part. In class, in front of all the students, a Suffolk University professor challenged the authenticity of a student’s writing. A skeptical professor handed graduate student Tiffany Martinez a graded assignment that questioned her use of the transition word “hence.”

The professor wrote “This is not your word.”

“Not” was underlined twice.

Martinez describes, “My professor handed me back a paper (a literature review) in front of my entire class and exclaimed ‘this is not your language.’ ”

This graduate student expressed the internal struggle the professor’s comment generated or reaffirmed: “Their blue pen was the catalyst that opened an ocean of self-doubt that I worked so hard to destroy . . . I am hurting because my professor assumed that the only way I could produce content as good as this was to ‘cut and paste.’ I am hurting because for a brief moment I believed them.”

As I read the rest of Martinez’s blog post, I began to hear the voices of my high-school students who speak about the dream of going to college. Many of them, like Martinez, will be the first in their families. I heard the insecurities that begin their sentences when they speak.

I understand that first-generation insecure ambition. I am the first in my family to go to college, to earn a master’s degree, to be a published writer.

When I read Martinez’s words, I heard the insecurity that I challenge more and more these days in class.

“I was just going to say,” a student said the other day.

I brusquely interrupted: “No. No, you were not just going to say,” I snapped. “Don’t minimize your ideas. Say, ‘I have this idea to share.’ Go!” READ MORE