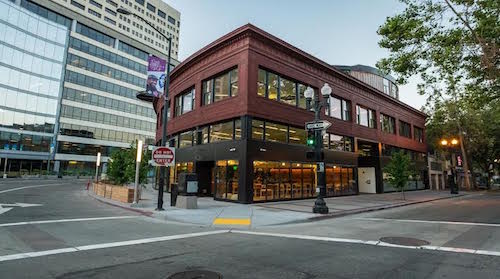 OAKLAND, Calif. – Venture capital (VC) dollars generally don’t end up funding black and Latino-owned startups. According to Brian Dixon at Kapor Capital, the seed stage investment arm of the Kapor Center for Social Change, the percentage of investments that go to companies where the founder is a person of color is 2 to 3 percent.

At Kapor Capital, on the other hand, over 50 percent of investments go to startups that have women and people of color in charge.

With a new headquarters at 22nd and Broadway now open, the Kapor Center hasn’t just revamped a long-vacant historic building in the middle of Oakland. It’s trying to make Oakland the new face of tech – one that’s setting out to solve a new set of problems beyond the ones faced by the Uber-for-everything, pick-up-my-dog’s-poop-for-me set.

Even with all the attention paid to the lack of diversity in tech, the most recent diversity reports from the biggest companies like Facebook and Google show that blacks and Latinos combined, on average, account for less than 10 percent of their workforces. The Kapor Center’s Level Playing Field Institute, which prepares low-income students and students of color to succeed in STEM fields, has been working to change that for about 15 years. (New America Media wroteabout LPFI’s Summer Math and Science Honors Academy in 2014.)

But it’s not just about having more blacks and Latinos working at places like Apple and Twitter. Kapor Capital has four partners – Dixon (who is African American), Mitchell Kapor and Freada Kapor Klein, and Ben Jealous (the former president of the National Association of the Advancement of Colored People). Of the more than 100 companies they’ve invested in to date, over half have diverse founders, and there’s a reason for that beyond diversity for its own sake.

“Diverse founders scratch their own itch,” says Dixon. “That’s why you do entrepreneurship – to solve problems that you see or that somebody close to you sees.”

“We’re looking for companies that are going to help benefit low-income communities and communities of color,” he says. “When we’re thinking about an investment, one of the main questions we ask is, ‘Who benefits if this tool actually works?’”

One example is Thrive Market, which Kapor Capital invested in this year. Thrive Market is a membership-based service that delivers healthy food for Costco-type prices; for every paid membership, it also donates a membership to a low-income household.

According to Kapor Capital, Thrive is currently working with the USDA to try to change some of the rules around food stamps. If food stamps were redeemable online, they say, people who don’t live near grocery stores or who lack transportation access could have food delivered.

Another recent investment is EarnUp, a company that helps people manage their loan payments so as to prioritize paying down the loans that have the highest interest rates.

“These are examples of the types of companies that we feel are helping close the gap,” says Dixon. The firm has committed to investing $40 million in such companies between 2015 and 2017.