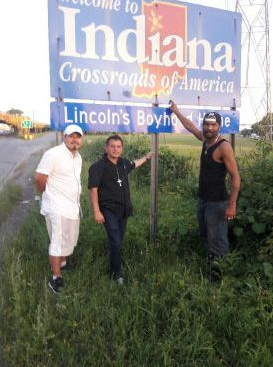 José Landaverde, an Anglican Catholic priest and community activist, has begun a protest walk that will take him from his from his Guadalupe Church parish in Chicago’s Little Village to the Cleveland, Ohio, site of the Republican National Convention. The 350 mile journey is done to “raise the consciousness and awareness of the American people and to tell them it is important to listen to the needs of the immigrant community.” Donald Trump’s immigration rhetoric has a lot to do with the reverend’s motivation. Ten people from his Chicago neighborhood are walking alongside the reverend.

Think of today as catch-your-breath day. After yesterday’s overflow of breaking news, today we get to sit back a little and gain some perspective on the Supreme Court’s rulings on affirmative action and immigration, on the House Democrat’s gun control sit-in, on the Senate’s surprise vote on guns and on the Brit’s vote to leave the European Union.

With so much big news it was a bad day to issue a little news release. But that’s what the Census Bureau did (actually, the Census released its latest figures last week, but the numbers were embargoed until yesterday, so that gave folks like the Pew Research Center a few days to dive into the digits). Some of the findings would have been headline worthy any other day.

You know all that talk about there being no racial minority in the U.S. because there will be no distinct majority in the not too distant future? That day is already here:

50.2 – The percentage of U.S. babies younger than 1 year old who are racial minorities.

1000 – The difference in the number of minority babies compared to non-Hispanic white babies younger than 1 year old in 2013.

16,000 – The difference in the number of minority babies compared to non-Hispanic white babies younger than 1 year old in 2014.

12,000 – The difference in the number of minority babies compared to non-Hispanic white babies younger than 1 year old in 2015.

50.3 – The percentage of children younger than 5 years old in 2015 who were ethnic minorities.
On to the big(er) news

►The Supreme Court in essence did nothing on immigration

And that’s because there’s a vacancy in the court, which is there because Justice Antonin Scalia died and the Republicans in the Senate haven’t (won’t) acknowledge President Obama’s nominee. So the court’s vote on the President’s executive actions on immigration came down to a 4-4 stalemate. The lower court’s block on the executive actions remains in place. That’s the basic gist of the news. Here are some of the headlines:

►Then there was Affirmative Action . . .

The ruling on the Fisher V University of Texas case was well received in the U.S. Latino community.

The Justices upheld on a 4-3 vote (Justice Kagan recused herself) the way UT figures out who will and won’t be accepted to their university. A student named Abigail Fisher was recruited by Edward Blum, who runs a conservative non-profit, to challenge the university’s admissions policies. The case went all the way to the Supreme Court, twice.

There are two pieces to note. One, by NBC News (5.5 minute read) talks about how the ruling gives hope to Latinos for equal access to higher education; the other is an NPR piece (8 minute read) published in June of 2013, when the Fisher case first surfaced, that analyzes the motives and the players in the attack on affirmative action.

“I call on the authorities to investigate this killing and its motives so that those responsible for it be brought to trial.”

– UNESCO Director-General Irina Bokova in a statement calling for an investigation into the motive of the killing of Spanish language journalist Jay Torres. The 57 year-old reporter’s body was found with several gunshots in Garland, Texas last week. He had been reporting on human trafficking and his family believes he was murdered because of his investigations. Torres was a long time freelance contributor to Fort Worth’s La Estrella newspaper.

This one is U.S. Rep. David Valadao (R-Hanford), of California, who had been quiet about the presidential race until yesterday. He released a statement:

“I am disappointed with the divisive rhetoric coming from this Presidential Election and cannot support either candidate. I cannot back a candidate who denigrates people based on their ethnicity, religion, or disabilities.”

Before this, in the wild days of 17 Republican presidential candidates, Valadao had said he would support the eventual GOP nominee. His district is 71 percent Latino.
►Latino activists in Arizona are energized by the election . . .

. . . but it’s not because of Trump, or Arpaio or anything like that.

What happened was a new state election law that, according to an NBC News report, “makes it a felony to collect someone else’s ballot, with the exception of family members, individuals who live in the same household and caregivers. The law will take effect this summer, unless pending litigation intervenes.”

Here’s a little background that’ll make you scratch your chin and go hhhmmm:

The ballots that are collected in person in Arizona are early voting ballots. In order to get one of those you need to be on an early voting list. In 2010 there were close to 91,000 Latinos on the list. (You sense where this is going?) This year the number is 300,000. For years is was permitted for the early ballots to be collected and turned-in, but not anymore.

All of a sudden there are worries over voter fraud. Arizona Governor Doug Ducey said “This bill ensures a secure chain of custody between the voter and the ballot box.”

The increase of Latinos means there are three-times as many Democratic-leaning voters in the early voting lists.
Here’s some good news

It’s an Associated Press story about a town in the foothills of the Sierra Nevada, close to Fresno, California, where the west coast drought had dried the source of drinking water.

Most of the 7,000 people in the town of East Porterville have improvised by drinking bottled water and installing tanks next to their homes for washing and flushing. Five hundred homes will be connected by the end of the year.

Have a great Friday.