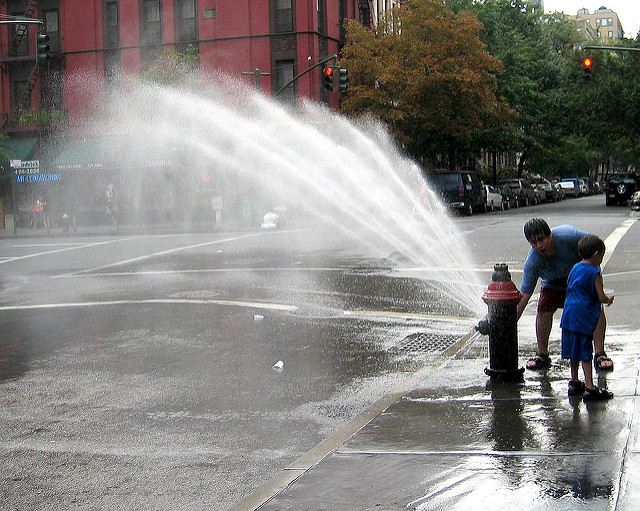 *Take away: “place matters in identifying the most vulnerable populations” to climate change. Read this piece. Inner cities, where most U.S. Latinos live and work, are heat islands, paved-over, radiating heat. The effects of climate change are multiplied. VL

The effects of climate change are negatively impacting the health of people worldwide. In the United States these impacts affect Latinos more, largely because most live in large metropolitan areas, where both global and local drivers of climate change stress the health of populations. Latinos are acutely aware that climate change is affecting their well-being, which is why they are strongly supporting action on climate change. However, they do so not only for their own sake: they are also deeply concerned about their children, future generations, as well as for others across the globe.

Latinos in the United States maintain cultural and family ties to their countries of origin, where the impacts of extreme weather are all too visible as hurricanes, floods, and droughts destroy lives, crops, and property.  Currently, Latinos number 17 percent of the United States’ population (up from nearly 12 percent in 2000), a rapidly growing demographic that is increasingly shaping electoral outcomes. Latinos believe that we all share in the obligation to fight climate change. A recent poll shows that 9 out of 10 Latinos support the government taking action to curb carbon pollution that accelerates climate change while 8 out of 10 want the President to act.  This holds true across political affiliations and income levels: 71 percent of Democrats, 44 percent of Republicans, and 63 percent of independents express strong support for carbon pollution standards, while 91 percent of those making less than 20,000 dollars a year, and 86 percent of those who earn more than 80,000 also feel very strongly about curbing global warming.

In this piece, I will explore some of the global and local drivers of climate change and how the Latino population is being affected.

Globally, the accumulation of carbon pollution in the Earth’s atmosphere is driving temperature increases that are putting people and environments at risk. But climate change drivers, impacts, and vulnerable people are unevenly distributed across the globe, which is to say that place matters in identifying the most vulnerable populations. Indeed, geography matters in the traditional ways we think about differences in the intensity and duration of weather-related events and impacts across the globe (think of floods, droughts, or hurricanes in tropical vs. temperate climates, or in the capacity to deal with weather-related disasters in developed vs. developing countries, for example).

But place also matters a great deal in other ways we don’t often think about.  When we “zoom into” countries and the cities within, we see that climate change impacts work in many different ways, and not necessarily for the same reasons that drive warming at the global scale.

People in cities typically conduct most of their daily activities in downtown or central business districts. It’s true that population densities are generally higher in the city, and that more combustion-related activities from vehicles, factories, air conditioning and heating increase demand for energy production, feeding back into carbon emissions.  But at the scale of a city, the most salient driver of local warming is the pattern of urban development.

Cities have high quantities and types of horizontal and vertical surfaces like concrete and steel buildings, glass facades, highways, paved roads, commercial strips, and industrial areas. Energy exchanges along these surfaces and urban canyons create environments that are markedly hotter than the surrounding countryside or rural areas. The materials used to build the urban environment are largely non-absorbent, meaning that because of their density they are very efficient at absorbing heat during the day, but not at releasing it back at night.  As one moves out from the city center to more suburban or rural areas, the heating effect diminishes because impervious materials give way to more porous land surfaces like hills, forests, soil, plains, or agricultural fields.

Scientists refer to this warming pattern as an Urban Heat Island because the gradient of high-to-low temperatures radiating out from the city center resembles an “island” of high temperatures in a “sea” of generally cooler rural environments.  The urban heat island is one of the best understood effects of human-induced local climate change, and has been known to scientists since at least 1833.

Of course, none of this means that global warming is not warming up cities. But the time scale at which carbon pollution is warming up the globe works differently from the way urban heat islands are warming cities. Global warming operates in years or decades as carbon pollution accumulates in the atmosphere, while the urban heat island is local, city-specific, and observable during 24-hour day/night periods.

Getting back to how geography matters, low-income, inner-city neighborhoods in general (where many Latinos live) have little vegetation and green spaces, which are known to help reduce high temperatures.  In addition, Latinos are more likely than others to find work in outdoor environment occupations like construction or landscape maintenance, further increasing their exposure to high temperatures.  In general, the low social and economic status of many Latinos also prevents them from accessing preventive health care than can help them deal with pre-existing conditions like cardiovascular disease and diabetes, diseases that can potentially trigger emergency room visits or death under extreme heat exposure.

During hot summers, the cycle of intense daytime heat accumulation and slow release at night is increasing extreme heat stress among people in cities—and Latinos are feeling the impacts more strongly. For one, the Latino population in the United States is highly urban: out of the 50.4 million Latinos living in the US, 45 percent live in the metropolitan areas of California, New York, Texas, Arizona, and Florida. High rates of poverty (25.3 percent, compared to 13.2 for all Americans) and low educational attainment (only 14 percent have at least a Bachelor’s degree) limit Latinos’ access to air conditioning and personal vehicles that can provide immediate respite from extreme heat.

It is increasingly evident to politicians of all persuasions that they should take action to curb climate change.  Climate change has emerged into the public consciousness as a pressing issue that cannot be ignored. Latinos have demonstrated they are ready to support decisive action to combat the negative consequences that await this and future generations if climate change continues unabated.

This article was originally published by the National Resources Defense Council.

“Damn you bastards, coming here making trouble. Bunch of animals.” The two police offers responding to a call about an open fire hydrant lash out furiously at the Puerto Rican residents of New York City’s El Barrio neighborhood. It’s the summer of 1941, and all ten-year-old Nilda wants to do is enjoy the cool water with her friends. But the policemen’s curses end their fun, and their animosity is played out over and over again in Nilda’s life. She is repeatedly treated with contempt and even disgust by adults in positions of authority: teachers, nurses and social workers.

At home, though, she is surrounded by a large and loving—if somewhat eccentric— family that supports and encourages her artistic abilities. She experiences the onset of World War II and watches anxiously as several brothers go off to war; her stepfather’s poor health means he can’t work, causing serious financial difficulties for the family; one brother slinks off to the underworld, leaving behind a pregnant girlfriend, adding two more mouths to feed to the family’s already dire situation.

Named an “Outstanding Book of the Year” by The New York Times and one of the “Best Books of the Year” by the American Library Association in 1973 when it was first published, Nicholasa Mohr’s classic novel about life as an immigrant in New York City offers a poignant look at one young girl’s experiences. Issues of race, religion and machismo are realistically and movingly depicted in this groundbreaking coming-of-age novel that was one of the first by a Latina author to be hailed by the mainstream media.